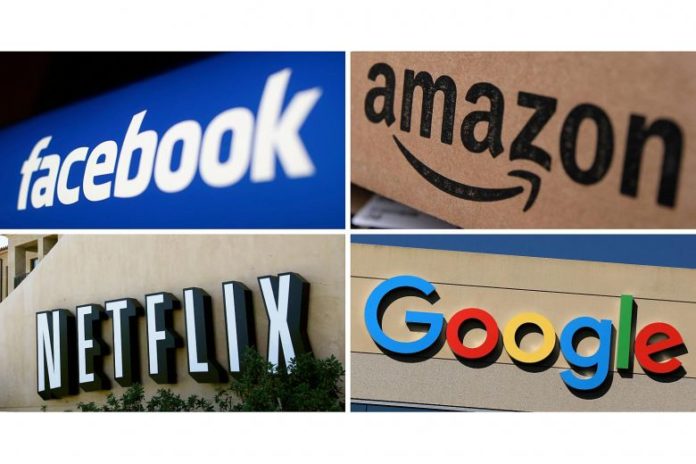 Britain said it would tax the revenue that online platforms such as Google, Facebook and Amazon make in the country to update a system that had not kept pace with changing digital business models.

Amazon was down 9 per cent, touching six-month low, while Google was off 5.5 per cent and Facebook was trading lower 3.5 per cent.

Netflix and Apple, the others in the so-called FAANG group of stocks, were down 8 per cent and 3.6 per cent respectively.

“It’s clearly not sustainable, or fair, that digital platform businesses can generate substantial value in the UK without paying tax here in respect of that business,” finance minister Philip Hammond said in his annual budget speech on Monday.

The tax will be designed to ensure established tech giants, rather than start-ups, shoulder the burden, Hammond told parliament.

The treasury said profitable companies would be taxed at 2 per cent on the money they make from UK users from April 2020, and the measure was expected to raise more than 400 million pounds ($512 million) a year. The tax will be based on self-assessment by the companies.

“A tax take of 400 million pounds or so might seem a small number when you consider that Amazon alone is expected to post sales of $233 billion this year. But the worry for the tech giants, and their shareholders, is that this is the pebble that starts an avalanche of taxes from international governments,” Hargreaves Lansdown analyst Laith Khalaf said.

Big internet companies, which say they follow tax rules, had previously paid little tax in Europe, typically by channelling sales via countries such as Ireland and Luxembourg which have light-touch tax regimes.

In 2016, Facebook started recording revenue from its UK customers supported by local sales teams and subjecting any taxable profit on the income to UK corporation tax.

The tax will target platforms such as search engines, social media and online marketplaces, Hammond said, and it will be paid by companies that generate at least 500 million pounds a year in global revenue.

Britain had been leading attempts to reform international corporate tax systems, Hammond said, but progress had been painfully slow and governments could not simply talk forever.

Clifford Chance tax partner Dan Neidle said the radical nature of the proposal clearly showed that Britain was becoming frustrated with the slow pace of change in global tax laws.

“The UK is running ahead of every other country except Spain,” he said.

But given the dominance of US tech giants, President Donald Trump’s administration may not appreciate the proposal at a time when Britain is trying to agree on new trade deals.