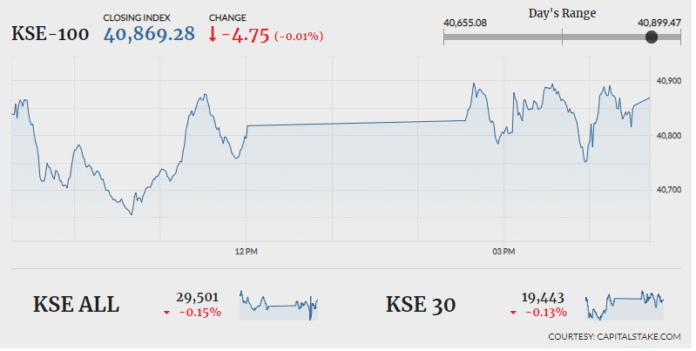 KARACHI: Failing to recover losses, the Pakistan Stock Exchange (PSX) ended a jittery week almost flat. Investors were taken aback after reports of an attack on the Chinese Consulate.

According to the latest data released by the State Bank of Pakistan on Thursday, the foreign exchange reserves held by the central bank have declined by 2.62 per cent on a WoW basis for 13th consecutive week. The reserves now stand at $7.3 billion.

Although the Saudi government has released $1 billion out of the $3 billion financial assistance, its impact on the market is yet to be observed. The central bank is also expected to raise the discount rate by another 100 basis points in the upcoming monetary policy statement.

Trading volumes declined significantly from the previous session and were recorded at 123.57 million, a fall of 23pc. Dewan Cement Limited (DCL +4.92 per cent), Maple Leaf Cement Factory Limited (MLCF +4.48 per cent) and Siddiqsons Tin Plate Limited (STPL -0.62 per cent) were the top traded stocks of the day. The scripts had traded 7.63 million shares, 7.27 million shares and 6.38 million shares respectively.

Pakistan Refinery Limited (PRL -2.53pc) declared its financial performance for the first quarter of Financial Year 2018-19 (1QFY19). The company’s sales were up by 38pc YoY, while the earnings per share declined from Rs1.12 in the same period last year to Rs-1.37 in the current year. Finance cost increased massively by 89 per cent YoY.