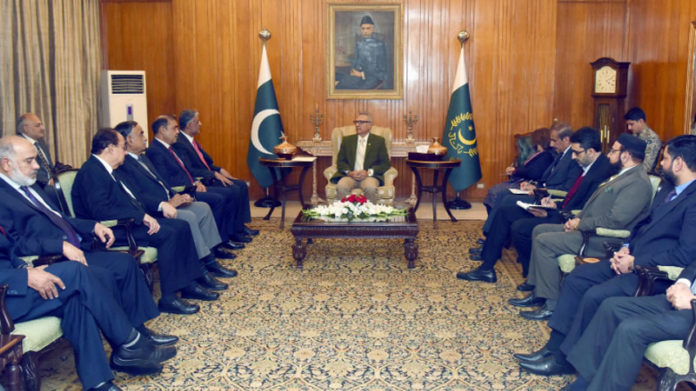 ISLAMABAD: President Dr Arif Alvi has said that strengthening of the private sector through the promotion of local goods and industry is of paramount importance for the economic development of the country.

The president emphasized that revival of the national economy is the topmost priority of the government for which industrial and business community should also play their constructive roles.

He stressed the need to increase the country’s exports so that the trade deficit could be decreased.

The president urged the business community to promote research in various fields so that new opportunities for national industry and commerce could be determined in accordance with international trends.

Meanwhile, President Dr Arif Alvi called for a public campaign to create awareness among masses regarding the filing of complaints to the federal ombudsman.

Talking to Federal Ombudsman Syed Tahir Shahbaz on Wednesday, he directed to hold quarterly seminars around the country to raise awareness among general public with regard to approaching the federal ombudsman for resolution of their grievances.

The president also agreed to chair a joint seminar of federal and provincial ombudsmen in order to sensitize the people about the role of these offices in resolving their complaints of at their doorsteps.

On the occasion, the federal ombudsman briefed the president about the performance of his secretariat during the year.