Home ECONOMY Pakistan to sign deals worth $30bn with KSA, UAE and China 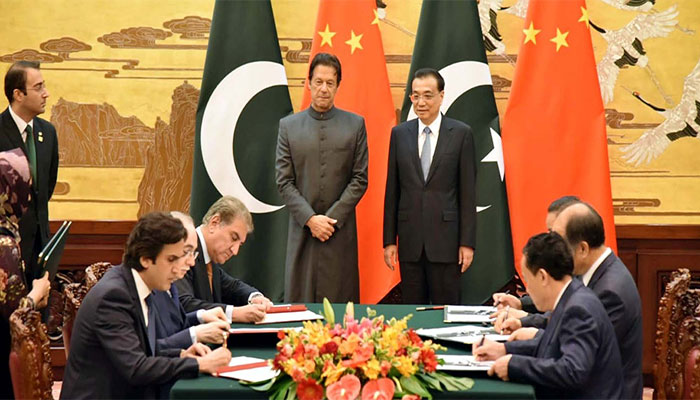 In an effort to revive the dwindling economy and to boost investment in the country, Pakistan would be signing agreements $30 billion worth with investors from Saudi Arabia, the UAE, Germany, Malaysia, and Korea in January, said Minister of State and Board of Investment Chairman Haroon Sharif in a media interview.

BoI is the premier investments promotion agency of Pakistan which helps foreign companies to invest in the country or expand their operations.

Islamabad has received firm commitments for investments from three of its allies, namely Saudi Arabia, the UAE, and China, ensuring that the country becomes the hub of diversified investments in the coming years, Sharif said.

“We are going to sign several memoranda of understanding (MoU) with Saudi Aramco and Acwa Power within a few weeks. Saudi Aramco is going to set up an oil refinery and petrochemical complex in Pakistan while Acwa Power would invest in Pakistan’s renewable energy sector,” Sharif said. “I am expecting around $15 billion investment from Saudi Arabia in the next three years. The inflow of investment for the oil refinery and petrochemical complex in Pakistan is estimated to be between $6 billion to $10 billion.”

Recently, Finance Minister Asad Umar had said that Saudi Arabia’s upcoming investment would be “the biggest foreign investment” in the history of Pakistan. However, he did not give the quantum of investment which the Kingdom was expected to make in the country.

Islamabad is also expecting a substantial amount of investment from the UAE, with major focus sectors continuing to be petrochemical, real estate, port and shipping development, agriculture, and corporate farming.

“I am expecting a similar amount ($15 billion) from the UAE in the next three to five years. We will sign a MoU with UAE’s companies in January 2019,” Sharif said, adding that the “Abu Dhabi National Oil Company (ADNOC), DP World, and Emaar Properties are among the prominent names who have committed to investing in Pakistan”.

In addition to Saudi Arabia and the UAE, Pakistan has also signed an agreement with China which is being described as the second phase of the China Pakistan Economic Corridor (CPEC) project.

“We had signed an industrial cooperation agreement with China two weeks ago. Under the agreement, they will put up industries in Pakistan’s economic zones which are located in Sindh, Punjab, and Khyber Pakhtunkhwa (KP),” Sharif, who had signed the agreement, said, adding that five priority areas have been identified, namely “food and agriculture, value-added textile, mining, and emerging technologies”.

“We estimate that around $15 billion to $20 billion will be invested within the next three years during the second phase of CPEC. Around $40 billion worth of investments will be made by these three countries (Saudi Arabia, UAE, and China) during the next three to five years,” Sharif, who is actively involved in the negotiations and developments, said.

Apart from Saudi Arabia, the UAE and China, the BoI has received written commitments from Malaysian, German, and Korean investors. “Around 10 investors from Malaysia have shown interest in the IT sector, halal food, and educational sectors. Volkswagen wants to set up a plant for assembling three to four of their models in Pakistan. We have received their letter of intent and the modalities will be worked out soon,” Sharif said.

The BoI chief added that the focus next year would be on facilitating investors, rather than marketing for investments, reasoning that “if half of the commitments we have in hand materialized that would be a great relief for Pakistan”.

Sharif said that he continues to deal with challenges in improving the country’s ranking in the ease of doing business and in ensuring that policies are consistent and investor-friendly.

Pakistan has improved its ranking by climbing up 11 notches from 147 to 136, according to the World Bank’s annual report titled Doing Business.

The government plans to improve the infrastructure and provision of utilities to accommodate the upcoming investments. “We have surplus electricity but there is a weakness in our distribution system which needs to be removed,” Sharif said.

He highlighted priority areas for the upcoming year including the acquisition of land for economic zones and development, an uninterrupted supply of electricity and gas to industries, streamlining of basic policies of taxation, promoting a culture of No Objection Certificates, and access to long-term financing.

Responding to a question about the inclusion of Pakistan’s name in a list filed by the Financial Action Task Force (FATF) and its possible impacts on the inflow of foreign investments, he said, “It will hurt foreign direct investments into Pakistan. FATF has given an action plan that is in our interests.”