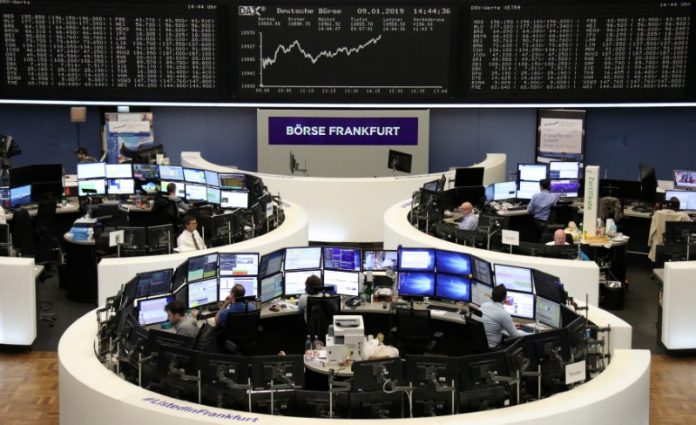 LONDON: The early-year rally in world stocks ran out of steam in Europe on Thursday and the dollar touched a near-three-month low, as mixed signals from US-China trade talks and caution at the Federal Reserve applied the brakes.

China said the three days of talks in Beijing had established a “foundation” to resolve differences, but gave virtually no details on key issues at stake.

A slew of weak data also dampened the mood. Again in China, factory-gate inflation was the slowest in more than two years, while worse-than-expected industrial figures in France provided more evidence that Europe is spluttering again.

Wall Street futures were in the red, putting the S&P 500, Dow Jones Industrial and Nasdaq on course for their first drop in five days.

“I am beginning to get a little concerned about the path of the European industrial data,” said State Street Global Markets’ head of strategy, Michael Metcalfe. “It is raising the possibility of a technical recession in Europe. One of the big challenges is that, if this is replicated in Italy’s data tomorrow, that potentially brings the budget questions back into the market’s thoughts.”

The soured sentiment saw the standard move into safe-haven government bonds that give a guaranteed return. Yields on German and French and government bonds – which move inversely to price – dropped toward recent two-year lows.

The European Central Bank will publish the minutes from its December meeting later, where it formally shut the mass bond buying program it has been using in recent years.

US Treasury yields last stood at 2.697pc, down from 2.710pc on Wednesday, when Fed minutes showed policymakers were becoming more cautious about future rate hikes.

The dollar remained flat after hitting its lowest level since mid-October.

It was barely changed at $1.1556 to the euro, which had gained 0.9 percent against the dollar during the previous session, its biggest one-day gain since late June.

China’s yuan also muscled higher, breaching the 6.8 per dollar level for the first time since August in both onshore and offshore trade in Asia.

“This drop in the dollar is an overdue correction following a surprisingly robust few weeks, despite the massive collapse in U.S. rate expectations,” said Ulrich Leuchtmann, currency strategist at Commerzbank.

Asian shares had performed fractionally better overnight on the weaker dollar and hopes of more economic stimulus in China.

But many stocks seesawed, and Tokyo and Shanghai both closed lower as markets parsed the trade talks and hoped that they will ultimately avert another ramping-up of US tariffs in March.

Emerging market bond investors then got a major jolt as Lebanon’s finance minister Ali Hassan Khalil told a local newspaper that it was weighing up a debt restructuring. Goldman Sachs had warned this week that such a move, if extreme enough, could potentially wipe out Lebanon’s banks.

“The exposure of Lebanese banks to the sovereign (local debt and Eurobonds), amounts to some 55 trillion Lebanese pounds, almost double the 30 trillion LBP capital base of the banking system,” the bank’s analysts wrote.

Lebanon has the third largest public debt-to-GDP ratio in the world at around 150 percent.

Chris Weston, Melbourne-based head of research at the foreign exchange brokerage Pepperstone, said he viewed more gains in oil prices as a key driver for any further rise in risk appetite.

If US crude futures can break through the $55 level, “you’re going to see real yields probably lower. That’s really good for the cost of money and taking some further headwinds out of the US dollar,” he said.