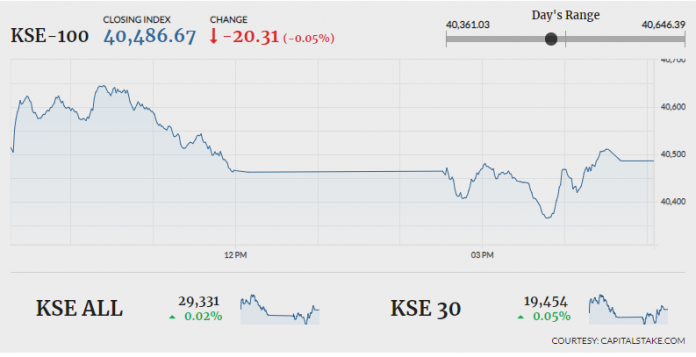 KARACHI: The Pakistan Stock Exchange (PSX) ended the last session of the week slightly negative, as indices kept trading in red amidst low market turnover. Foreign investors were net buyers for $2.60 million worth of shares on Thursday.

As per reports, Saudi Crown Prince Muhammad Bin Salman will arrive in Islamabad on a two-day official visit. During his stay, Pakistan and Saudi Arabia will be signing several agreements and memorandum of understandings for different sectors.

According to the data published by the State Bank of Pakistan, the foreign exchange reserves held by the central bank surged by 0.16pc and now stand at $8.21 billion. Previously, the reserves had plunged below the $7 billion mark. However, financial bailout packages from the United Arab Emirates (UAE) and Saudi Arabia helped in providing a cushion to the depleting reserves.

Baluchistan Wheels Limited (BWHL +5.00pc) declared its financial performance for the second quarter of Financial Year 2018-19. Sales declined by 21pc YoY, while earnings per share appreciated from Rs1.30 in the same period last year to Rs1.79.

Ali Asghar Textile Mills Limited (AATM 0.00pc) released its financial results for the second quarter of FY19. The company’s revenue was down by -73pc YoY, while earnings per share deteriorated from Rs0.10 in the same period last year to Rs-0.08 in the current year.

December 2, 2020
ISLAMABAD: The federal cabinet has approved $150 million grant for the procurement of Covid-19 vaccine, besides setting the criteria for the same. This was announced...