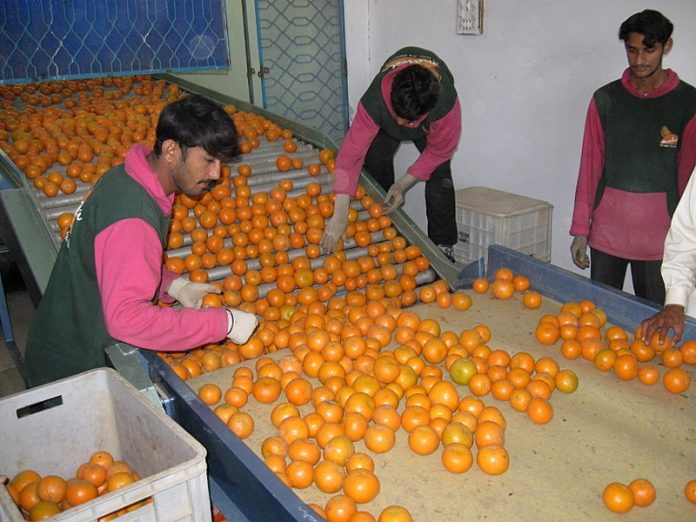 ISLAMABAD: Pakistan has exported around 350,000 tonnes of kinnow during the current season as compared to 335,000 tonnes during the previous season, registering an increase of 5pc.

“As the exports are likely to continue till April, it is expected that by the close of the season, the exports will touch 375,000 to 400,000 tonnes, which would represent an increase of 12pc to 16pc as compared to the previous year,” said Pakistan Horticulture Development & Export Company (PHDEC) Acting Chief Executive Officer Muhammad Ashraf while talking to Pakistan Today.

Although some exporters have expressed dismay over the number of exports during the current season, the CEO is hopeful that the export figure will touch the historic level of 400,000 tonnes. However, he deplored that the production of kinnow (2.1 million tonnes) remained the same during the past two seasons.

The export figure, as claimed by the government officials, is higher than the target set by exporters. The All Pakistan Fruit and Vegetable Exporters, Importers and Merchants Association (PFVA), the representative body of exporters, had set a kinnow export target of 325,000 tonnes for the current season (50,000 tonnes less than the last year’s target), keeping in view the high cost of production of citrus fruit and stiff competition from Turkey, Morocco and other prominent players in the international markets.

Ashraf said citrus exports had remained range-bound between $150 million to $170 million during the last 10 years. “Although exports constitute only 10pc of total citrus production, it is critical for price stabilization.”

According to him, citrus is an important foreign exchange earner which contributes 40pc to the total fruit exports, and “that is why the Ministry of Commerce has enhanced its focus on it”.

He said the Pakistani kinnow is amongst the juiciest mandarins in the world but owing to certain quality issues, it does not fetch the right value in the export markets.

It is pertinent to mention that the major kinnow export destinations this year included Afghanistan, Russia, Indonesia and UAE. However, the important market of Iran remained untapped.

According to leading fruit exporter Waheed Ahmed, “If Iran issues import permits for Pakistani exporters, we could cater to the Iranian market that has an export potential of 70,000 to 80,000 tonnes.”

He said the government should help the exporters by opening the Iranian market, as fruit and vegetables are coming from Iran but are not being exported from Pakistan.

“We are facing an issue regarding exports to Iran for the last seven years as Iran is not issuing the import permits,” Waheed mentioned.

A leading processor and exporters stated that the non-availability of new citrus varieties with extended harvesting season, high incidence of taxes on processing materials like wax, manual examination of containers at airport etc. were some of the factors affecting the citrus exports.

Growers and exporters were of the view that lowering the cost of inputs and effective role of extension services to eradicate farm diseases, opening of new markets like China, Philippines and Thailand are needed to boost exports in the horticulture sector.