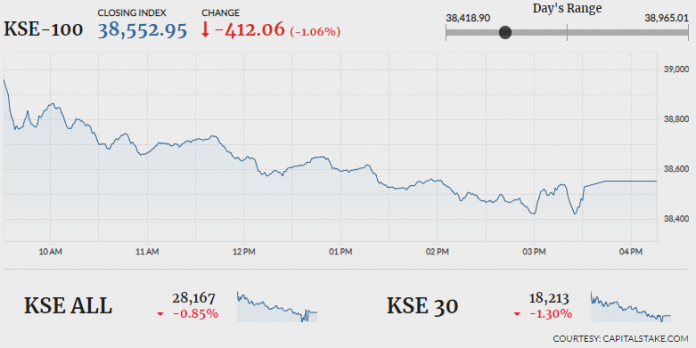 KARACHI: The Pakistan Stock Exchange (PSX) failed to sustain gains accumulated in the last session and closed Thursday’s session in the red zone.

Explaining the sudden rise and fall in the market, an analyst said perhaps yesterday’s index breakout was due to pre-emptive buying amid increasing expectations of a breakthrough with International Monetary Fund (IMF) by the mid of next month. However, he added, conflicting reports on deliberations with Financial Action Task Force’s delegation (FATF expressing serious reservations over insufficient physical actions on the ground against proscribed organizations) kept market enthusiasm in check.

Among other news that had a negative impact on the market, top officials from the Petroleum Division have stated that drilling at Kekra-1 well is far from its intended target of 5,500 meters as the 2nd sidetracking is underway, thus dousing investors’ hope of early offshore discovery.

Meanwhile, the Consumer Price Index stood at 8.30pc in February which is the highest level since 2014.

The analyst said investors, analysts, economists and other market players are all waiting of monetary policy statement, which would be announced tomorrow (Friday). “The market participants expect a nil to 75 basis points increase in the interest rate, which currently stands at 10.25pc,” he added.

Another issue that triggered market uncertainty was regarding Pakistan’s Emerging Market status. Questions were raised after the equity market wiped off around $44 billion since its upgradation from the Frontier Market. The country’s current weight in the EM Index is just above 3 basis points and with Habib Bank Limited (HBL -1.02pc) down 34.32pc in a year, the stock has fallen below the minimum market capitalization requirement of $1.60 billion. In order to maintain the status, a country required at least three stocks above that level.

Trading volumes nosedived on Thursday and so did the indices. Total volumes were recorded at 132.15 million with Unity Food Limited (UNITYR -17.42pc) in the lead again. The shares made up for one-third of the total volumes. The Bank of Punjab (BOP -1.68pc) followed with 7.14 million traded shares, 5.40pc of the total market volume.

Selling was seen across the majority of the sectors with the refinery sector, last session’s top gainer, chopping off 3.06pc from its cumulative market capitalization. The cement sector shed 2.51pc while the oil and gas exploration sector’s market capitalization was lighter by 2.22pc.

In the middle of all the falls, Interloop Limited completed its initial public offering. The company is the largest hosiery producer in Pakistan and among the largest global player. It raised Rs5.025 billion through the book building process which is an over-subscription by 1.37 times. The second phase of offering to the general public resulted in applications for shares worth Rs1.89 billion.