Asad Umar hits back at critics, says emergency measures need of the hour 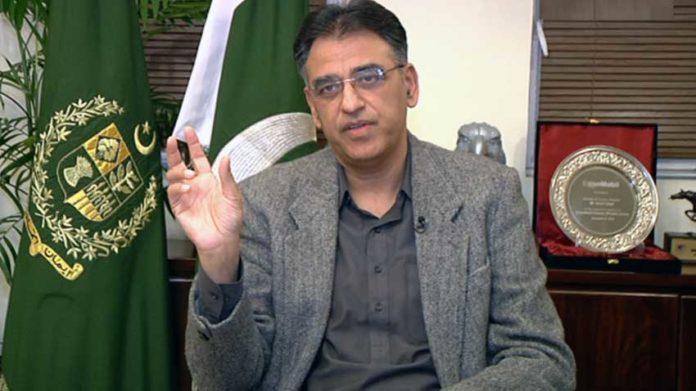 – ‘Going forward, the govt will focus on a comprehensive overhaul of the duty structures to promote ease of doing business’

ISLAMABAD: Finance Minister Asad Umar said on Monday brushed aside the critics who accuse the government of having destabilised the economy with the weakening in the rupee-dollar exchange rate.

“The exchange rate is not a measure of a strong economy. At one point, the Pakistani rupee was stronger than the Japanese yen, even though the latter’s per capita income was much higher than ours,” he explained.

Umar said that past governments had “ruined” the economy by artificially maintaining the exchange rate, and insisted that the practice had needed to end.

He expressed his frustration with television anchors who have been critical of his policies, suggesting that business reporters — “who have a much better understanding of the technicalities of the economy” — sit with anchors and share their knowledge on how to report on economic matters.

He regretted that “fake news reports are being circulated so that more investors park their money in foreign currency instead of stocks”, leading to speculative pressure on the exchange rate.

The PTI government, he said, inherited a “very sick patient” that had been taken out of the ICU (Intensive Care Unit). The government, therefore, had to take “emergency measures”.

“The crisis is over. Now we are in the stabilisation process,” he announced. Once the economy is stable, the country can move towards growth, he added.

Pakistan’s economy is still hostage to a huge spending gap and fiscal and current account deficits, Umar said while stressing on the importance of overcoming these “fundamental issues”.

At this stage, the government is borrowing loans in order to pay the interest of old loans, Umar lamented, adding that the country’s primary deficit is negative. He identified low revenue generation by the FBR as a key reason behind the economic difficulties being faced by the country. Drop in exports and low savings also hinder the country’s economic growth, he said.

The policy framework was developed based on inputs from the Prime Minister Economic Advisory Council (EAC) and development partners including World Bank and Asian Development Bank.

The finance minister highlighted three critical factors that have constrained Pakistan’s growth potential and caused cycles of balance of payment crisis. These include the revenue-expenditure gap, the saving-investment gap and the export-import gap.

The finance minister stated that the MTEF report showcases the government’s strategy to deal with these three structural imbalances and putting the economy on the path to sustainable growth and job creation.

“In order to address the revenue-expenditure gap, the government has launched a comprehensive tax reforms agenda with a focus on simplification of tax procedures, aggressive use of technology to identify tax gaps and enhancing enforcement capacity of the tax machinery,” he added.

He highlighted the recent changes in laws related to Benami Assets and actions taken by the Federal Board of revenue as the first phase of this strategy. Similarly, he highlighted measures to curb expenditures of the public sector through new rules that will prohibit supplementary grants and lead to greater accountability for improvement in public financial management.

To address the export-import gap, the finance minister highlighted that government has taken measures to bring stability to the exchange rate market and noted that the State Bank of Pakistan feels that the previously overvalued exchange rate (between 2015-2018) has now come close to its equilibrium point. He lamented that exports had collapsed in the last five years and Pakistan’s export to GDP ratio fell to just 8pc in 2017, compared to Bangladesh (15pc), India (19pc), Turkey (25pc) and Vietnam (102pc).

The finance minister highlighted that the current regime has taken immediate steps to enhance the competitiveness of the export industry through a reduction in their energy costs and by processing their long overdue refund claims.

“Going forward, the government would focus on a comprehensive overhaul of the duty structures and reforms for ease of doing business to boost exports,” he stated.

The finance minister emphasized the role that greater regional connectivity with China and Turkey will provide in linking Pakistan with the Global Value Chains. He also highlighted that the new agriculture policy will boost exports through productivity gains.

He concluded his speech by quantifying the impact the MTEF reforms will bring to the economy. He noted that as a result of the reforms, the economy will grow at a sustainable pace of 6pc to 8pc over the medium term, without facing cycles of economic instability in the shape of a balance of payment crisis. He stated that more ‘productive’ jobs will be created in the next 5 years than in any period of Pakistan’s history with the government channelling resources to the most job-intensive sectors in the economy including housing, SME industry (Kamyab Jawan program), tourism, agriculture industry and IT.

The minister concluded by stating that successful reforms will ensure no government in the future will have to go to the IMF or other friendly countries for emergency financing.