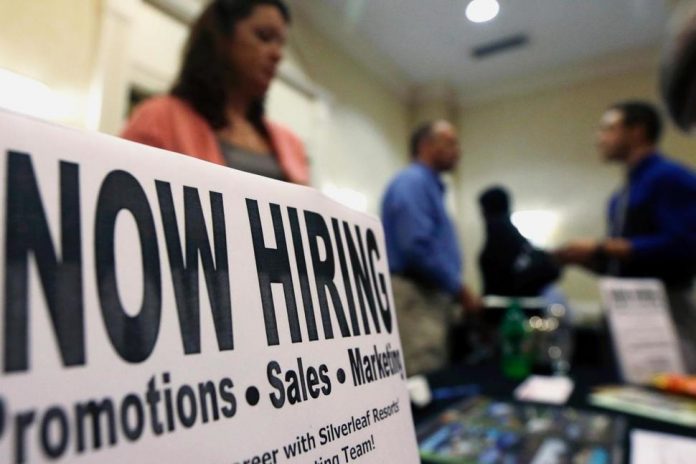 WASHINGTON: US job growth surged in April and the unemployment rate dropped to the lowest in nearly half a century, pointing to sustained strength in economic activity even as last year’s massive stimulus from Republican tax cuts and spending increases fades.

The Labour Department’s closely watched monthly employment report on Friday showed the greater-than-expected 263,000 new jobs created last month were spread across most industry sectors, and the unemployment rate was just 3.6pc, the lowest since December 1969.

Still, wage gains did not accelerate as expected, holding at a reading that is consistent with moderate inflation. Moreover, the decline in the unemployment rate was driven largely by the most people leaving the labour force in a year and a half.

The report was supportive of the Federal Reserve’s decision on Wednesday to keep interest rates unchanged and signal little desire to adjust monetary policy anytime soon. Fed Chairman Jerome Powell described the economy and job growth as “a bit stronger than we anticipated” and inflation “somewhat weaker.”

“Employment gains are strong enough to dispel any immediate concerns over the health of the economy, while wage gains are not strong enough to force the Federal Reserve’s hand to tighten the policy stance,” said Harm Bandholz, chief US economist at UniCredit Research in New York.

Aside from April’s surge in nonfarm payrolls, the economy created 16,000 more jobs in February and March than previously reported. Economists polled by Reuters had forecast payrolls rising by 185,000 jobs last month.

The strong economy, especially the labor market, could boost President Donald Trump’s re-election hopes next year. Trump, who has boasted about the economy being one of the major wins of his first term in office, cheered April’s robust employment gains.

The economy will mark 10 years of expansion in July, the longest on record. Job gains are well above the roughly 100,000 needed per month to keep up with growth in the working-age population.

The second month of strong employment growth put to rest concerns about a recession and ironically undercut Trump’s call for the Fed to cut interest rates. A brief inversion of the U.S. Treasury yield curve in March had fanned fears of an economic downturn, leading markets to price in a rate cut this year.

“It would be awfully hard for the Fed to explain a rate cut given the strong job market, so forget that,” said Joel Naroff, chief economist at Naroff Economic Advisors in Holland, Pennsylvania.

Hiring remains strong, despite anecdotal evidence of worker shortages in the transportation, manufacturing and construction industries, suggesting there is still some spare capacity in the labor market.

Steadily rising wages had until recently been keeping workers in the labor force and drawing back some who had dropped out. Average hourly earnings rose 6 cents, or 0.2pc in April after rising by the same margin in March. That kept the annual increase in wages at 3.2pc for a second straight month.

Though wage growth is not strong enough to drive up inflation, it is seen sufficient to underpin economic growth as the stimulus from last year’s $1.5 trillion tax cut wanes. The economy grew at a 3.2pc annualized rate in the first quarter, driven by a surge in exports and inventories, quickening from the October-December period’s 2.2pc pace.

The dollar fell against a basket of currencies, while US Treasury prices rose. Stocks on Wall Street were trading higher.

Despite April’s robust job gains, there are signs the economy slowed early in the second quarter.

A survey from the Institute for Supply Management (ISM) on Friday showed a measure of services industry activity dropped to a 20-month low in April. It followed on the heels of another ISM survey this week showing factory activity hitting a 2-1/2-year low last month.

Last month’s two-tenths of a percentage point drop in the unemployment rate from 3.8pc in March was because 490,000 people left the labor force in April, the most in 18 months. It was the fourth straight month of workers dropping out of the labor force and could shrink the pool of available workers.

The labor force participation rate, or the proportion of working-age Americans who have a job or are looking for one, fell to 62.8pc in April from 63.0pc in March.

This suggested more slack in the labor market than indicated by the unemployment rate. The drop in participation was almost across the board, with significant declines among prime-age and younger workers.

“The supply side of the economy looks a little less shiny in light of the decline in the participation rate,” said Michael Feroli, an economist at JPMorgan in New York.

A broader measure of unemployment, which includes people who want to work but have given up searching and those working part-time because they cannot find full-time employment, was unchanged at 7.3pc in April.

Economists expect job growth will slow this year as fewer workers become available, which will push up wages and lift inflation back to the Fed’s 2pc target. An inflation measure tracked by the US central bank increased 1.6pc in the year to March, the smallest gain in 14 months.

Employment at construction sites increased by 33,000 jobs in April, rising for a second straight month. Manufacturing sector payrolls rebounded by 4,000 jobs after being unchanged in March.

The industry is being pressured by layoffs in the automobile sector as assembly plants try to cope with declining sales and an inventory overhang. The auto sector shed jobs for a fourth straight month.

Employment increased in the leisure and hospitality, professional and business services, healthcare, transportation and warehousing, and financial activities industries. But retail payrolls declined for a third straight month.

Temporary help, a harbinger for future hiring, rebounded last month after dropping in March. Government payrolls increased by 27,000 in April.

Facebook
Twitter
Linkedin
WhatsApp
Email
Previous articleEU, Britain condemn US oil and nuclear sanctions on Iran
Next articleUsage of Chinese yuan in Pakistan, other BRI countries on the rise