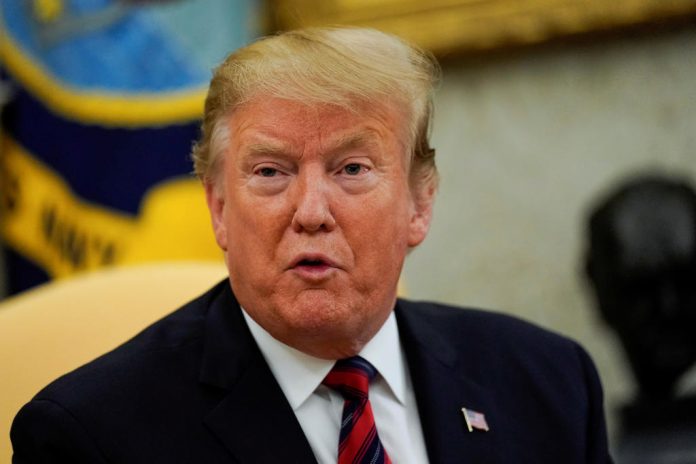 WASHINGTON: US President Donald Trump said on Wednesday he would be happy to keep tariffs on Chinese imports in place, adding that China was mistaken if it hoped to delay a trade deal with the United States until a Democrat controlled the White House.

Trump made the comments after Reuters reported that China had backtracked late on Friday on almost all aspects of a draft trade agreement between the two countries, in a move that threatened to blow up months of negotiations.

The United States will increase tariffs on $200 billion worth of Chinese imports from 10pc to 25pc at 12:01 a.m. EDT (0401 GMT) on Friday, according to a notice posted on the Federal Register, the US government’s official journal.

Trump announced the increase in a Twitter message on Sunday.

The tariff increase, if implemented, would come in the middle of two days of talks in Washington between US and Chinese officials. China is sending Vice Premier Liu He, its lead negotiator for the US-China trade dispute, to the talks.

“The reason for the China pullback & attempted renegotiation of the Trade Deal is the sincere HOPE that they will be able to ‘negotiate’ with Joe Biden or one of the very weak Democrats,” Trump, a Republican, tweeted on Wednesday morning.

“Guess what, that’s not going to happen! China has just informed us that they (Vice-Premier) are now coming to the US to make a deal. We’ll see, but I am very happy with over $100 Billion a year in Tariffs filling US coffers,” he added.

The United States and China have waged a 10-month trade war marked by tit-for-tat tariffs on hundreds of billions of dollars of each others’ goods, roiling financial markets, disrupting supply chains and crimping global economic growth prospects.

The United States is demanding Beijing make sweeping changes to its trade and regulatory practices, including protecting US intellectual property from theft and forced transfers to Chinese firms, curbs on Chinese government subsidies and increased American access to China’s markets.

Trump, who has largely embraced a protectionist trade policy as part of his “America First” agenda, also has sought massive hikes in Chinese purchases of US farm, energy and manufactured products to shrink a gaping US trade deficit with China.

But sources familiar with the talks said China’s latest demands for changes to a 150-page document that had been drafted over several months would make it hard to avoid the US tariff hike on Friday. That increase would affect Chinese imports from computer modems and routers to vacuum cleaners, furniture, lighting and building materials.

Scott Kennedy, a China expert at the Centre for Strategic and International Studies in Washington, said the talks were at a delicate stage and much depended on what sort of proposal Liu is bringing to Washington.

“I think the Trump administration is quite serious about imposing tariffs,” Kennedy said. “I don’t think Liu He would have agreed to come if he was just going to give the US a lecture.”