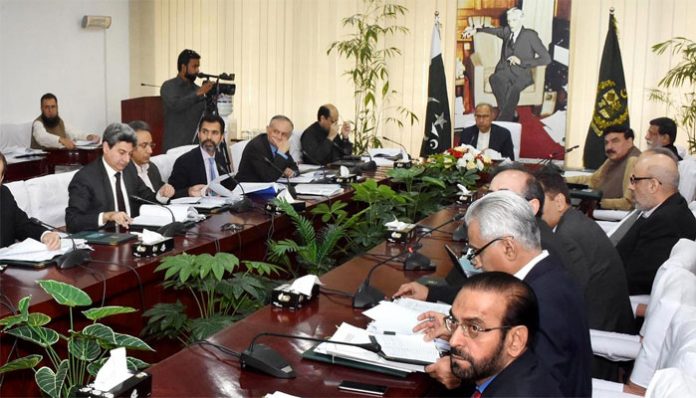 ISLAMABAD: Amidst uncertainty in the performance of the stock market and Pakistani Rupee, the Economic Coordination Committee (ECC) of the Cabinet is likely to approve the proposed Stock Market Support Fund tomorrow (Thursday) with an aim to safeguard the market.

As per sources, a proposal in this regard has been forwarded by the Ministry of Finance to the ECC. “The committee, which would be chaired by Adviser to Prime Minister on Finance Dr Hafeez Sheikh, is expected to approve the Rs25 billion market support fund,” they added.

According to details, the proposal suggests the establishment of two capital market support funds which would be maintained by an asset management company (AMC) to buy the shares of government-listed companies.

The finance ministry officials said the structure of the fund would be similar to the market support scheme introduced by the government after the 2008 stock market crash. However, they added, it is not clear whether a new AMC would be established for the purpose or an existing company would buy the shares of state-owned entities.

The management of Pakistan Stock Exchange (PSX) had urged the finance adviser to stabilise the capital market during his visit to the exchange on May 17.

The decision with regard to setting up a fund was finalised after his meeting with all the stakeholders, including stockbrokers, officials of the Central Depository Company (CDC), National Clearing Company of Pakistan Limited (NCCPL) and the state bank.

The working paper of the fund highlighted that one market support fund would be valued at Rs20 billion, which would be financed by the National Investment Trust (NIT), Pakistan State Oil, National Bank of Pakistan, Oil and Gas Development Company Limited etc.

“This fund will purchase the shares of major public sector scrips, while the other support fund, worth Rs5 billion, would be financed by mid-level institutions to buy shares of small government-listed companies,” a finance ministry official told Profit.

He said that certain taxation measures would be introduced to make the investments in the capital markets attractive in wake of rising interest rates.

“These measures will not only boost market activity but would also invite fresh investments in the capital market.”

Meanwhile, the stockbrokers have expressed confidence that the move by the government would help stabilise the market, saying that the real impact of new market support fund would be visible after Eid holidays.