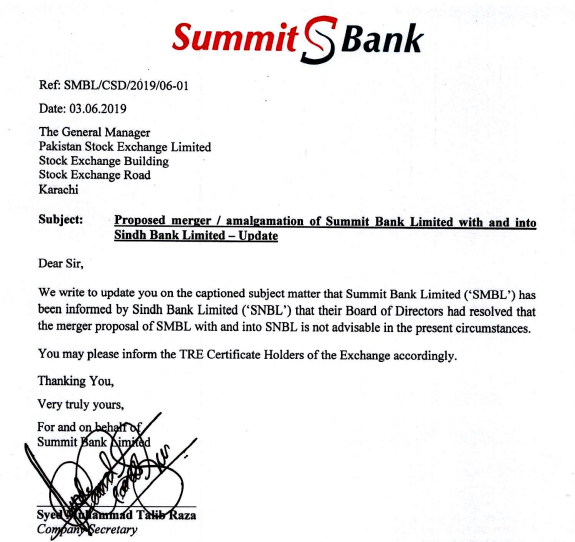 In the letter submitted to the PSX, it was said that that the SMBL has been informed by the SNBL that the Board of Directors of Sindh National Bank had resolved that the merger proposal between the two banks is not advisable in the present circumstances. It was further requested that the TRE Certificate Holders of the Exchange be informed accordingly.

There had been a lot of controversy behind this merger from the time it was proposed. Profit covered the merger and its potential beneficiaries in a detailed story in September last year. Even then the merger appeared to have some benefits for the side of Summit Bank considering the branch network and steady growth in Sindh Bank’s deposit base – an anomaly in itself being a state owned institution in Pakistan. But Sindh Bank’s side of the story remained hazy so far, on their intended gains from this merger if there were any.

The latest update however is that the Sindh Bank has finally decided not to go ahead with this merger and Summit Bank seems to have accepted it amicably for the time being.