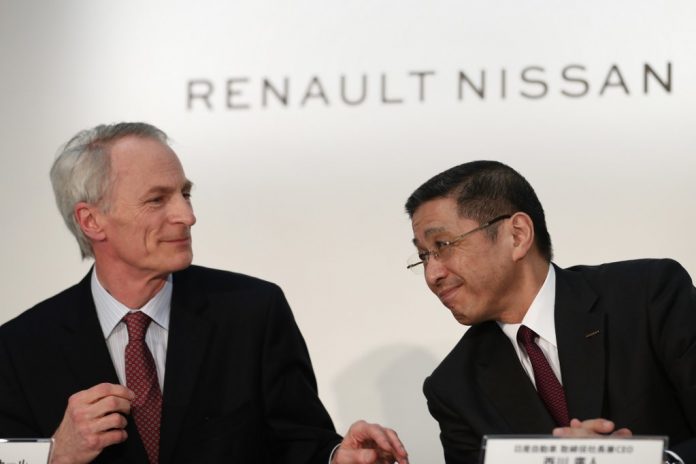 PARIS: Renault’s chairman vowed a “fresh start” on Wednesday for the carmaker’s strained alliance with Japanese partner Nissan, saying its success was key after a proposed merger with Fiat Chrysler fell apart.

Calling the Franco-Japanese alliance a “pillar and a motor for the development of all its members,” chairman Jean-Dominique Senard told Renault shareholders at their annual general meeting: “Today, the alliance is making a fresh start.”

“There can be no success for Renault without the success of the alliance,” he said.

It was Renault’s first AGM since the shock arrest last November of former chief executive Carlos Ghosn, who built up the alliance between Renault, Nissan and Mitsubishi into an industry behemoth selling some 10.8 million vehicles last year.

Since then Renault has been thrown into turmoil, its share price slumping to levels not seen since 2014 in the wake of Ghosn’s ouster from top posts at the three automakers.

And relations with Nissan have soured, with the Japanese firm accusing Renault of having too much weight in the alliance, and of keeping it in the dark over its tie-up plans with Fiat Chrysler.

That deal with Italian-American group would have forged a globe-spanning automotive network with the resources to develop electric and autonomous vehicles, seen as essential for cutting carbon emissions and addressing the mobility challenges of a rapidly urbanising world.

Renault’s net profit slumped by a third last year to 3.3 billion euros ($3.7 billion), in large part because of a tough year for Nissan, in which Renault owns a 43 per cent stake.

Nissan, in turn, holds 15 per cent of the French automaker — the same as the French state — through its stake confers no voting rights.

Around 900 shareholders attended the Renault AGM in Paris on Wednesday, a 50 percent jump from last year’s attendance, with executives facing a barrage of questions over the Nissan crisis and the failed Renault-Fiat deal.

“The board clearly failed to exercise its responsibility in the best interests of shareholders,” analysts at the Paris investment firm Phitrust said this week.

The crisis comes as carmakers worldwide grapple with a shift to electric and hybrid vehicles, with the industry spending billions to develop cleaner technologies.

Some shareholders have pointed the finger at Renault’s board for not exercising enough oversight over Ghosn, who is awaiting trial in Japan on charges of financial misconduct at Nissan.

Senard, who took over as Renault chairman this year, is also under pressure to lay out his strategy for shoring up the alliance with Nissan, just weeks after his plans for closer management integration were rejected by the Japanese firm.

Adding to the tensions, a leaked letter from Senard to Nissan this week said Renault would block a governance overhaul at the Japanese firm, which Nissan denounced as a “most regrettable” move.

Renault executives have played down the issue, saying they are confident the two carmakers will reach an agreement before Nissan’s AGM on June 25.

Last month, Fiat Chrysler unveiled a surprise 50-50 merger with Renault, but the deal collapsed just over a week later, with the Italian-American carmaker blaming political resistance from the French state.

French Finance Minister Bruno Le Maire said it was “legitimate” for Paris, as the biggest shareholder in Renault, to have a say in the proposed tie-up and that Renault should focus on shoring up its relationship with Nissan before pursuing mergers with other firms.

The tensions with Nissan and the collapse of the merger talks have raised questions over the future of the French carmaker, which last year sold 3.9 million vehicles, more than half of them outside of Europe.

Nissan and Renault have been partners for more than 20 years after Ghosn stepped in to pull the Japanese firm back from the brink of bankruptcy.

But the industry’s challenges are only expected to mount this year, not least as the EU further clamps down on emissions targets, which carmakers must meet or face heavy fines.