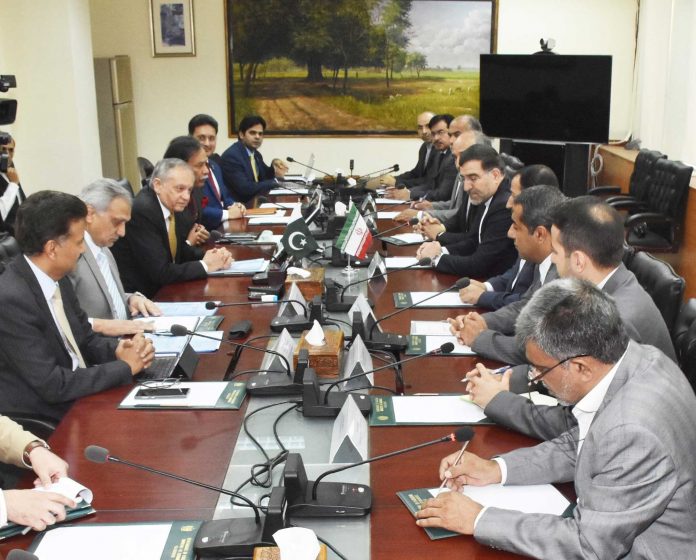 The adviser apprised the delegation of Pakistan’s intention to increase bilateral trade and economic ties with Iran. He underlined important trade-related issues that were discussed during the prime minister’s visit to Iran and expected a positive response from the Iranian side.

These issues included operationalisation of Pak-Iran Preferential Trade Agreement (signed in 2006) and working out a barter trade mechanism in order to increase the bilateral trade volume between the two countries.

Dawood emphasised upon the removal of all the Barriers to Trade (TBTs) in order to materialise the trade potential of the two countries. “To start the barter trade, in the first instance, both the countries should select a few items having a competitive advantage,” he asserted.

In this regard, he said, Pakistan can enhance the export of wheat, sugar, rice and fruit to Iran and the later can export products of its interest to Pakistan.

The Iranian side acknowledged the fact that Pak-Iran trade relations were not matching the real potential. They stressed upon the requirement of constituting a committee for barter trade.

“Both countries have huge potential in the agriculture sector, which is not yet exploited,” the Iranian parliamentarians highlighted, adding that Iran showed interest in the import of animals but it was not possible under the import policy in vogue.

The Iranian delegation also touched upon the Iran-Pakistan gas pipeline issue and emphasised upon developing a mechanism to move forward on the venture, as “the project was imperative to the economic security of both Iran and Pakistan”.

The parliamentarians extended full support for the removal of potential bottlenecks in the gas pipeline project and called for joint efforts in this regard. They also requested the Pakistani government to open more border points between Pakistan and Iran, mainly at Ramdan, Pishin and Korak, to facilitate trade activities.

The adviser suggested removing various forms of taxation such as road and load taxes on vehicles/trucks that cross the borders.

The Iranian commerce minister would visit Pakistan on July 4-5 for trade talks.