Taking the menace of gas theft head on 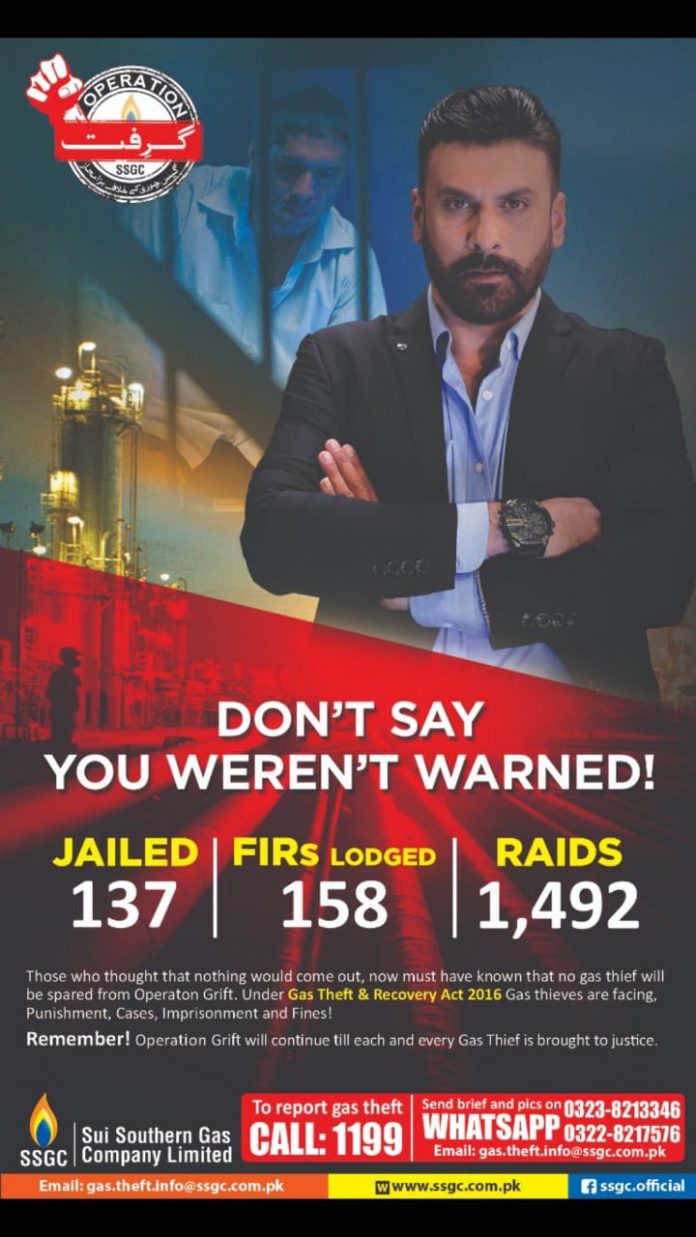 Natural gas is the biggest source of primary energy with a share of 48 per cent in Pakistan’s energy mix. And Pakistan possesses one of the largest gas pipeline networks in the world, nearing some 150,000 kilometres, for gas distribution and transmission, servicing more than 8 million customers. However, one of the key technical issues being faced by utility companies around the world and in Pakistan is line losses or Unaccounted-for-Gas (UFG).

In Pakistan, UFG generally accounts for more than 10 per cent of the total gas supplied but goes all the way up to 60 per cent in some areas.

Meanwhile, Sui Southern Gas Company (SSGC) and Sui Nothern Gas Pipeline Limited (SNGPL), both have numerous engineering feats to their name, as they have successfully incorporated state-of-the-art technology in their operations and have adopted a customer-centric approach that can be compared to top energy companies in the world. However, for many years, both SSGC and SNGPL have been plagued by UFG, which is termed as the gap between total gas purchased and total gas accounted for as sales.

UFG is a very serious issue since every 1 per cent increase in UFG means that Oil and Gas Regulatory Authority (OGRA), in such case, takes away Rs1.2 billion from the gas companies’ financial profits as a penalty, thus severely affecting their financial bottom-line.

The major contributing factor in UFG is theft of natural gas that makes up a whopping 51 per cent of the total gas lost. And it does not only affect the gas companies but gas theft also causes an annual loss of Rs50 billion to the national exchequer. It is also a national issue and Prime Minister Imran Khan has recently directed for a countrywide crackdown on gas thieves. Thus tightening the noose on the gas thieves is proof that the government and the gas utilities under it are on the same page.

Although in the past, legislation was promulgated to rein in gas theft, the efforts made by the gas companies to control gas theft could not make much progress. Moreover, instead of paying the gas bills on time, a number of consumers in domestic, commercial and industrial sectors resorted to using the fuel illegally which is a clear violation of Gas Sales Agreement (GSA). Such consumers bypassed gas meters, and ran heavy generators using unauthorised connections, damaged transmission lines, tampered gas pipelines and meters and managed to get away with the crime scot-free.

In 2016, National Assembly of Pakistan passed Gas (Theft and Recovery Act) that allowed the imposition of heavy penalties on offenders engaged in various types of gas theft with a maximum punishment of 14 years and a penalty up to Rs100 million. Hence, SSGC, faced by rising levels of UFG, was driven by the Act to take stringent measures against gas theft cases.

Then in 2017, the Company’s Security Department was revamped as the Security Services and Control Gas Theft Operations (SS & CGTO) Department. The newly formed department comprised of professional and motivated personnel and established gas theft intelligence, security, prosecution and operations wings. In conjunction with SSGC Police that was established back in 2015 and other law enforcement agencies including Sindh Rangers and Federal Investigation Authority (FIA), the department started making regular raids against domestic, commercial and industrial units.

Since July 2017, SS & CGTO Department has undertaken 127 intelligence based operations across Sindh and Balochistan by conducting the raids on those domestic, commercial and industrial units that were involved in blatant gas theft under the title “Operation Grift” campaign. Overall, the department has conducted around 1,370 raids as part of the ‘Operation Grift’.

In May 2018, in the first such arrest was made, of a roadside restauranteur in Karachi, which was arrested and sentenced for five years and fined Rs50,000. Since then, around 20 miscreants have been apprehended and sent to jail. In February this year, a CNG station owner was found using illegal gas connection and was sentenced to 13 years and was fined Rs180 million. As a result of these operations, natural gas worth 1,315 MMCF (Rs755 million) has been saved to date. Few SSGC officials who collude with the miscreants have also not been spared.

SSGC’s efforts have been further boosted by the establishment of more than 35 Gas Utility Courts in Sindh and Balochistan, as defined in the Act, to take punitive action against the offenders and serve them punishment commensurate with the type of theft committed. The Act spurs a common citizen into playing a proactive role in prosecuting the wrong doers. Section 25 of Gas Act 2016 specifically states that if an incident of a bona fide theft is reported to the Company, the reporting individual, as per law, will be eligible to 5 per cent of the recovered amount.

While on the ground, SSGC continues its relentless drive against gas thieves, the Company’s Corporate Communication Department is regularly running media campaigns in print, electronic social media and digital media publications about this menace. The aim is to mobilize the stakeholders about this crime against community so that they too stand with SSGC to combat it.

SSGC’s current mass media anti-gas theft campaign that began in March this year is primarily aimed at the rising tide of industrial theft. New television commercials have been developed and media planning has been done to ensure that the message reaches more and more customers in the Company’s franchise areas throughout Sindh and Balochistan. The advertisements carry strong messages, warning the miscreants against unauthorized enhancement of gas loads and installation of the suction booster in industrial units, both of which can land them in trouble.

To root out what is bad in the society is never easy. Team SSGC is, however, determined to counter gas theft and the inroads it has made during the last about one year is a manifestation of its steadfastness against this major misdemeanour. Gas theft is a crime against community and SSGC’s true success in this regard will be ensured with a concerted effort from the government, the general public and the media.