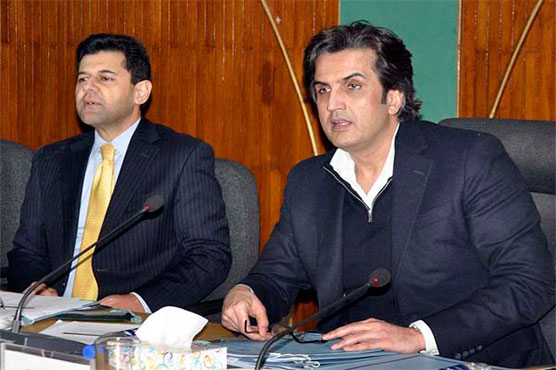 Planning Secretary Zafar Hasan and senior officials from the federal and provincial governments were also present in the meeting.

Projects related to food & agriculture, science and technology, information technology and climate change were presented in the meeting.

The Ministry of Climate Change presented the ‘Ten Billion Tree Tsunami’ project (phase-1) worth Rs125 billion, which was referred to ECNEC for approval.

Speaking on the occasion, the planning minister said that this was a flagship project of the incumbent government and its implementation would mitigate the impact of climate change in the country.

He hoped that the institutions concerned would select environment-friendly species for effective implementation of the programme.

Meanwhile, the Pakistan Atomic Energy Commission presented the ‘Pakistan Research Reactor-3’ project worth Rs4.67 billion, which was recommended to ECNEC for approval.

The second project related to science and technology was ‘Establishment of the Post Graduate Center for Artificial Intelligence in Agriculture and Health Sciences’ worth Rs527.676 million. The project was approved by the CDWP.

As many as four energy-related projects were presented in the CDWP meeting. The first project, ‘Interlinking of 220KV Dharki, Rahim Yar Khan, Bhawalpur and Chistian Grid Stations for improvement of power supply system in Southern Area’, worth Rs12.27 billion, was presented and referred to ECNEC. The second project, ‘220KV Larkana New Substation’, worth Rs5.80 billion, was also referred to ECNEC. The third project, ‘Consultancy services for feasibility study of solar water-pumping in Balochistan area’, worth Rs195.19 million, was approved by CDWP. The fourth energy-related project, ‘Evacuation of Power from 220/132KV Grid Station Swabi’, worth Rs747.290 million, was also approved by the CDWP.

Two projects related to SUPARCO were presented in CDWP. The first project, ‘Pakistan Multi-Mission Satellite (PAKSAT-MMI)’, worth Rs.34.66 billion, was referred to ECNEC whereas the second project, ‘Feasibility and system definition study of Pakistan Optical Remote Sensing Satellite (PRSS-02)’, worth Rs316 million, was accorded approval by the CDWP.

Six projects related to food and agriculture were presented in the CDWP. The first project, ‘Promotion of Trout Farming in Northern areas of Pakistan’, worth Rs2.35 billion, was given approval by CDWP. The second project, ‘Pilot Shrimp Farming cluster Development’, worth Rs6.12 billion, was referred to ECNEC. The third project, ‘Calf feedlot fattening (Prime Minister Initiative)’, worth Rs2.38 billion was approved.

The sixth project, ‘Water Conservation in Barani Areas of KP’, worth Rs14.25 billion, was referred to ECNEC.

The meeting also accorded approval to a project titled ‘Provision of Security Infrastructure in Malakand, Swat and other conflict areas of KP (Revised)’, worth Rs2.95 billion.