Traders shut down markets across Pakistan 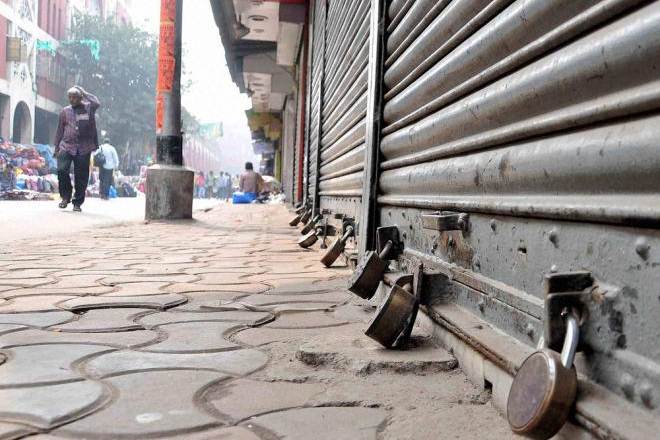 —Most businesses remain shut in Lahore, Karachi, Peshawar and Quetta in protest against ‘unfair’ taxes levied by govt

LAHORE/KARACHI/ISLAMABAD: A countrywide shutter-down strike was observed by traders in all part of the country in a protest against the “anti-business measures” taken by the federal government in the budget for the current financial year.

The traders demanded that the “unfair taxes” be withdrawn, especially the value-added tax on traders.

According to media reports, the strike was partially successful in Karachi, while in Peshawar its success rate was 98 per cent, with Lahore and Quetta trailing behind at 90 and 95pc, respectively.

It is pertinent to mention here that the Karachi-based businessmen and traders were the first to give a nationwide call for the shutter-down strike about three weeks ago, but they were stalled after the government attempted to negotiate.

However, the prime minister’s visit to Karachi failed to appease traders after he refused to withdraw CNIC condition for sale and purchase activities.

Most areas of Lahore remained closed during the day.

A shutter-down strike was observed in areas, including Hall Road, Mall Road, Liberty Market, Bedian Road, Ferozepur Road, Sarafa Bazaar and Jail Road; a few shops, however, were open and catered to customers on these roads.

The Lahore administration and the traders tried to negotiate, however, the city admin failed to convince the protesting traders. The strike in Lahore was also backed by the Lahore Chamber of Commerce.

There were few exceptions though. In Mianwali, Nurpur Thal, Tonsa Shareef, and Khanqah Dogran continued work as per routine.

“The strike call was given on the basis of a host of unresolved issues, ranging from an increase in be bracket of taxable income to the mandatory procurement of national identity cards (NICs) from customers conducting transactions worth Rs5 million or above,” said All Karachi Tajir Ittehad (AKTI) Chairman Atiq Mir, who represents around 450 markets in the city.

Speaking to a local media outlet, Mir claimed that authorities had tried to get markets opened at a few select places and also [tried to] misled media about the strike.

“By increasing the sales tax on retail and asking traders to give a record of every sale and purchase, traders have been compelled to take this drastic action,” he said, adding that he regretted the situation as he understood that such strikes result in financial losses to many parties and not just one.

However, the Karachi Tajir Action Committee (KTAC) expressed displeasure over the strike, calling it unreasonable as the government had accepted 10 out of their 11 demands.

Traders in Islamabad also joined the traders across the country in protests. A complete shutter-down strike was observed in the federal capital after the government failed to contact smaller traders for talks.

All Pakistan Traders Association (APTA) President Ajmal Baloch said that Federal Board of Revenue and government only hold talks with chambers and avoids smaller traders.

He said “4.1 million registered traders have been ignored” by the government.

“Today’s shutter-down is not only being observed by traders, in fact, it also channels the voice of consumers,” he added.

Residents in Khyber Pakhtunkhwa (KP) province suffered immensely because of the closing of shops of the edible commodities, as the strike almost crippled the daily routine.

In Kohat, the traders’ community protested the budget reforms and took to the streets on the call of the central leadership of the trader federations on Saturday, with all the markets and shopping malls being closed in the morning. They were however opened later in the day.

The main procession was taken out by the representative trade unions which was participated by the political activists of mainstream political organisations, as well as members of civil society.

The speakers, including trades union leaders, criticised the government saying that budget 2019-20 was against the wishes of Pakistani people.

Moreover, shops were also closed in Tank with strikes reported from Kulachi, Draban, and Pharpur, Ramak, and other adjoining areas. Tight security measures were being adopted by the police administrations during the protests.

Traders in Balochistan, including Quetta, also supported the strike call and activities remained ceased in the main areas of the provincial capital, such as Mini Market, Nawa Kali, Saryab Road, Joint Road, and Bacha Khan Chowk.

Other cities in the province, including Hub, Chaman, Gwadar, Sibbi, Kalat, Kachlak, Ziarat, and Qila Abdullah followed the suit.

While critics opined that the strike is simply an effort of the traders to blackmail the government into maintaining the status quo through the undocumented economy to evade income taxes, citizens also sang the same tune on social media, raising eyebrows on the motive behind the strike.

They accused the traders of ‘corruption’ by attempting to hide their tax liabilities by refusing to let the government document their activities.