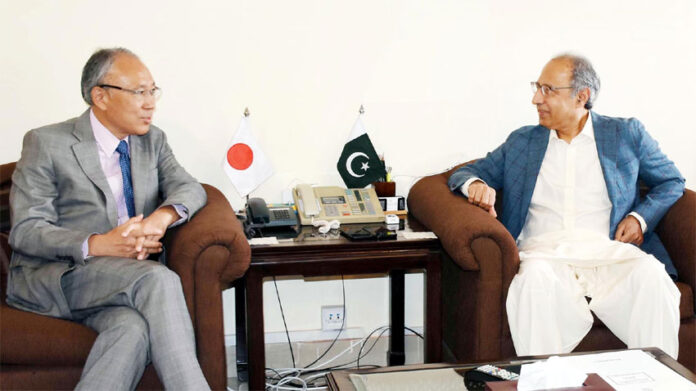 ISLAMABAD: Ambassador of Japan to Pakistan Kuninori Matsuda said on Tuesday that Japan International Cooperation Agency (JICA) is planning to enhance the level of economic cooperation with the government of Pakistan, adding that Pakistan could prove to be an important gateway for expansion of regional trade between Japan and the Central Asian States.

The Japanese envoy said this during a meeting with Adviser to Prime Minister on Finance and Revenue Dr Abdul Hafeez Shaikh.

The ambassador congratulated the adviser on assuming his responsibilities as the leader of the government’s financial team and briefed him on the existing level of cooperation between the two countries.

He informed the adviser that the government of Japan and JICA are cooperating with the government of Pakistan on various social development programmes in the health and hygiene sectors, besides providing technical assistance in counter-terrorism activities.

Moreover, he said, the Japanese investors are planning to invest in pharmaceutical and food & agriculture sectors of Pakistan. “The Japanese government is planning to invite high-level Pakistani business delegations to Japan to explore the possibilities of finding new trade ventures,” he added.

The adviser welcomed the interest taken by the Japanese side in improving its economic relations with Pakistan, saying that he would continue to support the further strengthening of this relationship.

Hafeez Shaikh also shared with the ambassador the details of his recent visit, along with the prime minister, to the United States. Progress made on the Financial Action Task Force (FATF) was also shared on the occasion.

The adviser said that the relationship with the United States under the leadership of Prime Minister Imran Khan is on a more stable footing than the previous tenures and on the FATF programme, the government is making all possible efforts to come out of the grey list; the US authorities have acknowledged the hard work and seriousness of the Pakistani government in controlling terror financing and money laundering.