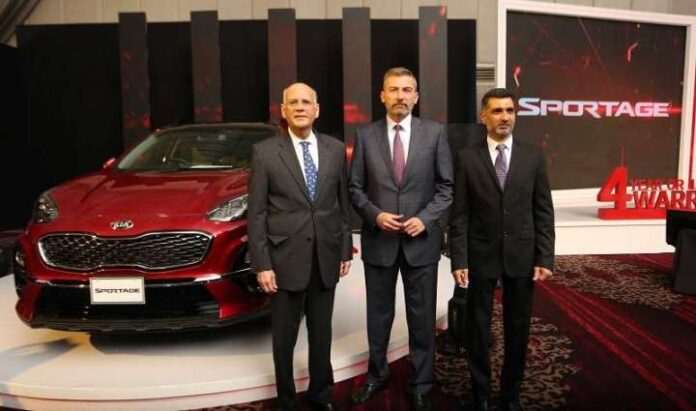 “We promised that we will introduce high-tech specifications and innovations and we have already started setting a benchmark in the industry,” said Kia Lucky Motors CEO Asif Rizvi while addressing a press conference in the provincial capital.

Rizvi informed that KLM has invested $175 million on setting up a new state-of-the-art auto plant having a capacity of 50,000 units per year.

“KIA has the ‘power to surprise’, which can be gauged by the four-year or 100,000km warranty offered to the customers,” he stated. “We have received an overwhelming response with regard to the KIA Sportage bookings. The limited number of cars, which were introduced at introductory rates, got sold in just 10 days.”

Apart from being the first AWD vehicle assembled locally, KIA Sportage would have a panoramic sunroof among several smart features that Pakistani consumers would enjoy for the first time in any locally-produced vehicle, he maintained.

The KLM chief said that currently, the company has 15 dealers across Pakistan, adding that KIA has a three-year programme to expand its dealers’ network across all major cities of the country.

He said in the past, Pakistani consumers had limited choices of brands and models. “There were long waiting periods and some consumers even had to pay a premium to get their vehicles delivered early. However, after the new entrants coming into the market, consumers will neither have to pay any a premium nor will they have to wait months for delivery of vehicles.”

He continued that the introduction of the new entrants would also bring an overall improvement in the local auto sector in terms of warranty periods and service quality.

He said KIA vehicles would have Euro II engines as per the fuel options available in Pakistan.

Talking about tax concessions for new entrants, Rizvi said that the concessions were given to attract new investment in the auto sector and to increase the number of locally-produced vehicles for Pakistani buyers.

“The existing players have a huge localisation advantage over the newcomers. It will take any new entrant at least five years to achieve similar levels of localisation; the tax concessions given by the government would ensure level playing field for all auto players.”

Rizvi thanked the Board of Investment, Ministry of Production and Industries and the Engineering Development Board for facilitating the new entrants in the automobile manufacturing industry of Pakistan.

He said since its inception, KIA has introduced ‘Painting Robots’ at its plant to give a superior quality paint experience to its customers. KIA has also equipped its plant with a full-body Coordinate Measuring Machine (CMM) and a very well designed Test Track mirroring Pakistan’s actual road conditions, all to ensure the best quality and ultimate customer satisfaction, he added.

Talking about the global ranking and quality of KIA vehicles, Rizvi said for five consecutive years, KIA has been ranked as No 1 mass-produced car in the JD Power’s Initial Quality Survey, which is based on their own internal inspection processes (JD Power is an American company that ranks vehicles).