Iran-Pakistan gas pipeline to be completed by 2024 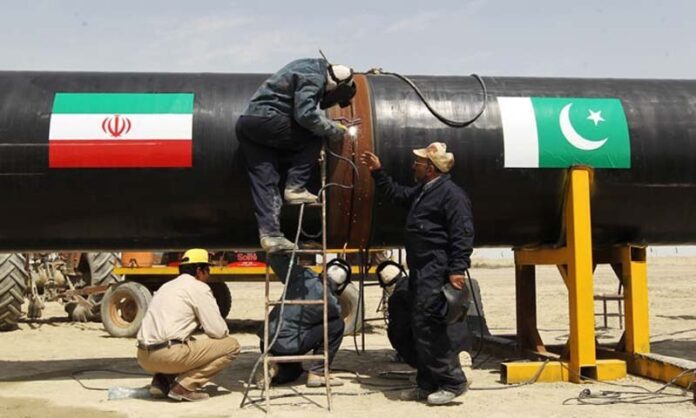 –Pakistan, Iran will sign a third agreement for the gas pipeline in Turkey next week

ISLAMABAD: Pakistan and Iran have decided to complete Iran-Pakistan (IP) gas pipeline project by 2024 and in this regard a third agreement will be signed in Turkey during the next week between the Iran’s National Iranian Oil Company and the Pakistan’s Inter State Gas System.

According to sources, Pakistan and Iran will sign Iran-Pakistan (IP) Gas Pipeline Project Amendment Agreement No 3 during the next week in Istanbul.  They said that a principle decision to withdraw the legal notice by Iran was made during the prime minister’s visit to Iran in April as the special assistant to the PM on petroleum had held a meeting with his Iranian counterpart Amir H Zamaniania on the sidelines of this visit and the Iranian side had expressed its intentions to withdraw the notice if the agreement on extension of the gas sales and purchase agreement was finalised.

They said that Pakistan, under proposed Iran-Pakistan (IP) Gas Pipeline Project Amendment Agreement No 3, would construct gas pipeline infrastructure on its territory and it would be bound to purchase 750MMCFD [million cubic feet per day] of Irani gas by August 2024. And, if Pakistan fails to fulfill its commitment then Iran will file case in France for imposing heavy penalty/fine on Pakistan.  They said that Pakistan can import cheaper gas in comparison to LNG price to meet its gas demands. They also said that as per the IP-GSPA [Gas Sales, Purchase Agreement], the first gas flow was to start from January 1, 2015. However, the project (IP) could not be implemented due to international sanctions on Iran while the Iranian government had proposed to provide financing for the project as well as EPC contractor under the government-to-government cooperation agreement dated December 1, 2012, sources added.

Sources further informed that the federal cabinet meeting held under the chairmanship of Prime Minister Imran Khan, had already approved with Iran. They said that the signing of the agreement is scheduled for August 26, 2019 and the incumbent ISGS MD would sign this agreement on behalf of the Pakistani government. However, dates are revised and now the signing will be done during the upcoming week. And, one-time permission to travel abroad will be given to present ISGS MD as interior ministry has been asked to do so in favour of larger national interest, said sources.

“Pursuant to the signing of the Amendment Agreement No 3 under the French Law, parties would have another term of five years for any claim under the IP-GSPA,” the document stated.

It is also learnt from the documents that presidents of both sides had signed the Inter-Governmental Framework Declaration on May 24, 2009, and the federal cabinet had approved signing of the IP-GSPA on June 3, 2009, while the IP-GSPA was signed on June 5, 2009. Similarly, the sovereign guarantee was issued by Pakistani government on behalf of Inter-State Gas Systems (Pvt) Limited (ISGS), a wholly owned state company of GoP on May 28, 2010. The IP-GSPA became effective with effect on June 13, 2010.

Likewise, the cabinet approved the cooperation agreement on January 30, 2013. However, the Iranian government unilaterally withdrew from government-to-government cooperation agreement on March 17, 2014, and Pakistan therefore served the Force Majeure and /or Excusing Events Notice under the IP-GSPA to National Iranian Oil Company (NIOC)) on March 29, 2014. The Pakistani side has taken a “stance that these force majeure and Excusing Event conditions still persist, therefore the IP-GSPA obligations shall remain suspended”.

The NIOC vide email dated January 9, 2019, proposed to sign an addendum to the IP-GSPA in order to extend the limitation period of any claim under the IP-GSPA as Article 224 of the French Civil Code provides that claim for breach of a contractual obligation may be brought within five years from the day the obligations became due. Subsequently, the Iranian side served a notice of Material Breach of IP-GSPA obligations vide letter No 431 MDC dated February 27, 2019 and gave Pakistan side 180 days in accordance with the IP-GSPA to remedy the situation which was lapsed on August 26, 2019. NIOC also made this breach notice as notice under the sovereign guarantee issued by government of Pakistan in favour of NIOC. The Iranian side indicated to refer the matter to arbitration pursuant to clause 19.3 of the IP-GSPA and the clause of the guarantee and to claim an order for specific performance.

It is pertinent to mention here that the gas would be supplied from Iran’s south Pars gas field and delivered at Pak-Iran border near Gwadar. The project would be implemented on a segmented approach whereby each country is responsible for construction of pipeline in their respective territory. The distance up to Iran-Pakistan border is 1,150 kilometer, while Pakistan’s segment distance is 781km. The Iranian side has already completed construction of over 900km within Iran. The gas volume to be transported to Pakistan is 750 MMCFD and the supply contract is for 25 years.