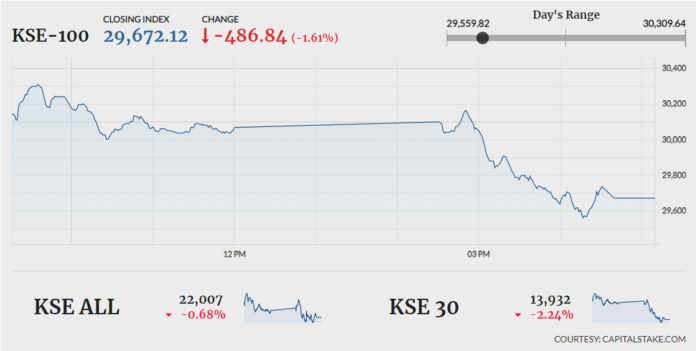 KARACHI: The stock market continued to bleed on Friday as the investors preferred to observe activities on the political and economic fronts. Indices remained volatile for the entire session whereas volumes declined slightly from the preceding session.

On the economic front, the total foreign exchange reserves held by the country rose by $25 million on a weekly basis and were recorded at $15.63 billion. The forex reserves previously stood at $15.61 billion.

Moreover, the Asian Development Bank has pledged to provide $7.50 billion worth of financial assistance to Pakistan over the next three years under its Country Assistance Strategy. The ADB’s high-level delegation led by Vice President Shixin Chen was on a two-day visit to Pakistan.

National Foods Limited (NATF +0.76pc) declared its financial results for year ending 30th June 2019. The company announced a final cash dividend of Rs4 per share along with 20pc bonus shares. Sales increased by 2.6pc YoY, while earnings per share jumped up from Rs7.61 in FY18 to Rs8.77 in FY19.

General Tyre and Rubber Company of Pakistan Limited (GTYR -3.84pc) released its financial performance for FY19 along with bonus shares of 20pc. Sales declined by 11pc YoY, while earnings per share depreciated from Rs7.04 in FY18 to Rs1.21.