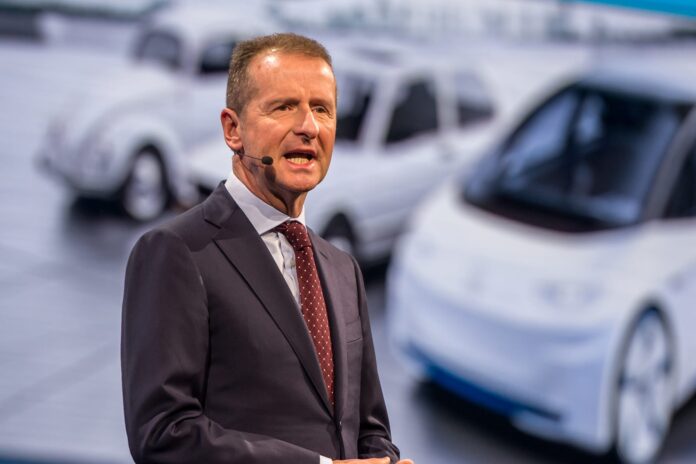 FRANKFURT: German prosecutors have accused Volkswagen’s CEO of holding back market-moving information on rigged emissions tests four years ago, raising the prospect of fresh upheaval at the carmaker just as it tries to reinvent itself as a champion of clean driving.

Prosecutors in the city of Braunschweig said on Tuesday they would press criminal charges of stock market manipulation against Volkswagen CEO Herbert Diess, as well as non-executive Chairman Hans Dieter Poetsch and former CEO Martin Winterkorn.

The charges show how the German company, which in September 2015 admitted using illegal software to cheat US diesel engine tests, is struggling to move on from a scandal which has cost it more than $30 billion in vehicle refits, fines and provisions.

Court proceedings are underway over that admission. The indictment from the prosecutors in Braunschweig – in Volkswagen’s home region of Lower Saxony – is part of a separate legal push to try managers over an alleged delay in informing investors of the company’s wrongdoing.

Lawyers for the three accused said they would contest the charges that they knowingly held back vital information. Volkswagen said its full supervisory board would convene on Wednesday to discuss the indictments.

In a statement issued after an emergency meeting, the board’s executive committee said it “cannot see that there was any deliberate attempt not to inform the capital market”.

If accepted by a Braunschweig state court, the indictment would lead to a trial date being set.

The former US regulator who helped bring Volkswagen’s cheating to light dismissed the company’s arguments.

“The excuse that top managers knew nothing is very weak,” Alberto Ayala, who served at the California Air Resources Board (CARB) until 2017, told German news magazine Spiegel.

Separately on Tuesday, German prosecutors hit rival carmaker Daimler with an 870 million euro fine for breaking diesel emissions rules. The Stuttgart-based maker of Mercedes-Benz cars said it would not appeal.

Volkswagen this year bucked a trend of falling demand for passenger cars by launching a range of popular sport utility vehicles, and is investing billions to try to become a leader in electric and self-driving technologies.

Its shares were down 2pc at 153.42 euros in afternoon trade.

Diess’s lawyer said the indictment would not hinder him in his role as CEO, adding that as Diess did not join Volkswagen until July 2015 he could not have foreseen the scandal would have such a huge impact on the company.

Volkswagen shares lost up to 37pc in value in the days after the scandal broke. Had investors known about the emissions test cheating, they might have sold shares earlier or not made purchases, plaintiffs have argued.

Volkswagen and its executives have said the fallout from the scandal was not foreseeable, and that they had expected to reach a settlement with US authorities prior to the disclosure of the test cheating.

Braunschweig prosecutors said the accused should have kept investors informed.

“They pursued a strategy to achieve a settlement with the US authorities without disclosing all relevant information,” they said in a statement.

Winterkorn resigned in the days after the scandal broke, having been CEO for eight years. He told German lawmakers in early 2017 that he did not find out about the cheating any earlier than Volkswagen had officially admitted.

Poetsch became a management board member at Volkswagen in 2003 and was made chairman in 2015.

The 636-page indictment alleges Winterkorn was fully aware of the matter and potential financial damage to Volkswagen as of March 2015. Poetsch was allegedly informed on June 29 and Diess on July 27.

Investigations into the alleged perpetrators of the illegal engine control software, also known as defeat devices, have seen the arrest of the then CEO of Volkswagen’s Audi unit, Rupert Stadler. In July 2019, Stadler – whose contract was later terminated by Volkswagen – and three defendants were charged with fraud, false certification and criminal advertising practices. Investigations into a further 23 suspects continue, the Munich prosecutor said at the time.

Braunschweig prosecutors in April charged Winterkorn and four other managers with fraud over their role in the manipulation of emissions testing.