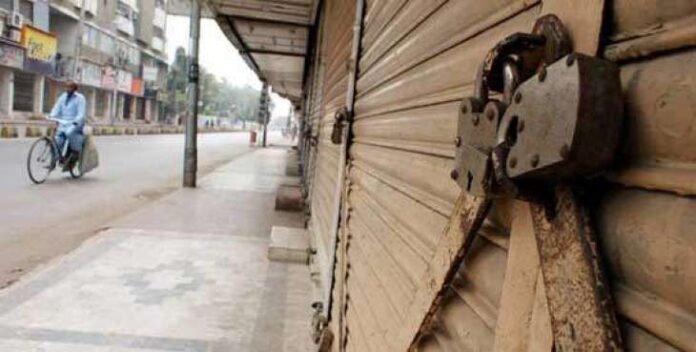 The markets and bazaars of Rawalpindi and Islamabad would remain closed for two days on Tuesday (tomorrow) and Wednesday to protest ‘the anti-traders policies’ of the government and the Federal Board of Revenue (FBR).

As per a media report, the traders of Rawalpindi city and cantonment have announced that on the call of All Pakistan Traders Association, they would observe complete shutter down strike for two days in all the bazaars and markets.

They alleged that the government and FBR were targeting the business community and harassing taxpayers instead of expanding the tax net.

They said that traders played a major role in the economy of any country and all governments gave incentives as well as provided them with an environment conducive for doing business.

However, they claimed that the present government was creating difficulties for the business community, adding that the FBR should review its policies otherwise the strike could go beyond two days.

The traders’ representatives urged Prime Minister Imran Khan to play his role to resolve their problems.

In Islamabad, the traders urged the government to introduce a fixed tax for small traders.

Islamabad United Group Vice-Chairman Sarfraz Mughal, at the Islamabad Chamber of Commerce and Industry, said in a statement that the economy would face a big loss because of the shutter down strike.

“It is impossible to accept all the conditions of FBR because of the economic crisis in the country. The government should address the issues through negotiations with the traders,” he said.

Mughal suggested that a fixed tax should be introduced for the small traders because it would give them a clear picture of how much they would have to pay every year.

“The FBR officials push us to bribe them and pay half of the tax to the government. In case of fixed tax, blackmailing of officials would be stopped,” he claimed.