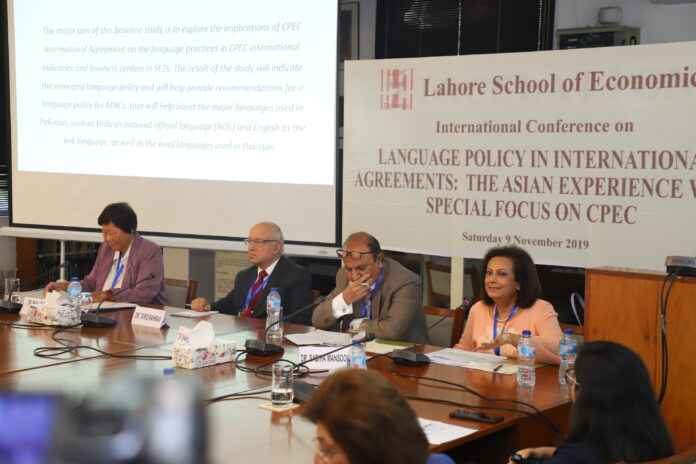 Lahore School of Economics (LSE) on Saturday hosted its first International Conference on “Language Policy in International Agreements: The Asian Experience with special focus on CPEC”.

A collation of three groundbreaking studies were presented at the conference with the fundamental objective to explore the implications of CPEC International Agreement on the language practices of stakeholders as there is no formal mutual language policy for CPEC between China and Pakistan; hence a high uncertainty exists about the roles of English, Urdu and local languages with the avant-garde of CPEC and Mandarin.

LSE Pro-Rector Dr Azam Chaudhry, in his welcome remarks, extended a warm welcome to the esteemed audience, including eminent scholars, policymakers, academicians, students and other dignitaries.

Dr Chaudhry stated that one of the key problems in Pakistan especially when it comes to CPEC is lack of language policy framework.

In the first session, Principal Researcher Dr Sabiha Mansoor presented a research study with the fundamental objective to explore the implications of industries and multinational companies that are operating in Special Economic Zones (SEZs) under the umbrella of CPEC, on the language practices of both Chinese and Pakistani employers/employees in M-3 City Faisalabad. Hence, data was gathered from seven firms – Chinese and Pakistani – located in M-3 City Faisalabad. The main findings revealed that although a democratic language policy was being implemented in SEZs and upward mobility was perceived by the lower management as a major motivator towards learning a new language, yet, they weren’t cognizant of the significance of CPEC in future and hence regarded Mandarin as secondary to English.

In the second session, Principal Researcher Dr Fareeha Zafar highlighted via her research study how CPEC infrastructure development has impacted the class structure of Pakistan through formal and informal language practices. Within broader socio-cultural dynamics, the study focused on education, language and class issues. The two districts of Bahawalpur and Sahiwal formed the research area and the findings of this research study revealed that local languages were used in informal whereas Urdu, Mandarin and English were used in formal settings. However, contrary to the findings of the first study, Mandarin was considered as a significant language by those who belonged to lower socio-economic status and particularly those who had a degree in technical education possibly because of the nature of jobs available at power plants. In addition to this TEVTAs further reinforced this idea. Therefore, findings reveal that Mandarin was seen as a contributing factor towards reducing inequalities among different social classes.

In the third session, Principal Investigator Shanzay Kamran presented the last study which examined the attitudes and motivations of policy planners, teachers and students towards Mandarin. The main findings highlighted that all stakeholders were keen to learn Mandarin because they perceived the growing influence of Chinese job market in the region particularly in Pakistan.

The fundamental finding of all the three studies highlighted that there was no female labour force participation. Women were highly marginalized.