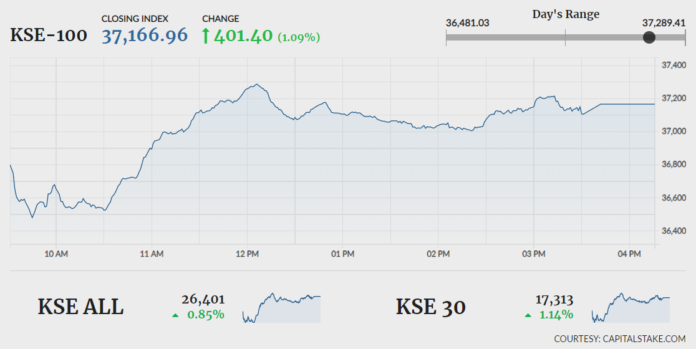 KARACHI: Bulls of the Pakistan Stock Exchange (PSX) took charge of the market once again on Wednesday after a range-bound session a day before. Indices that started the day on a negative note soon took a U-turn to surpass the 37,000 points mark.

Foreign investors ended up as net buyers for the fifth consecutive session on Tuesday with a net inflow of $1.22 million.

The condition of the auto sector continued to deteriorate further, as car sales plunged 55pc on a yearly basis to 9,569 units in October when compared with 21,342 units last year. The devaluation of Pak Rupee, an increase in the interest rate and decline in consumer spending forced the assemblers to further raise the prices.

According to latest data released by the State Bank of Pakistan, remittances sent home by overseas Pakistanis in the first four months of the current fiscal year (July-October FY20) dropped by two per cent. However, on a monthly basis, remittances grew by 14.46pc to $2 million in Oct. Pakistanis living in Saudi Arabia remitted the highest amount of $468.18 billion.

The overall trading volumes remained healthy and were recorded at 275.43 million. Unity Foods Limited (UNITY +4.29pc) turned out to be the volume leader of the day, followed by Worldcall Telecom (WTL -1.81pc) and TRG Pakistan Limited (TRG +2.98pc). The scripts had exchanged 16.46 million, 12.86 million and 11.08 million shares, respectively.