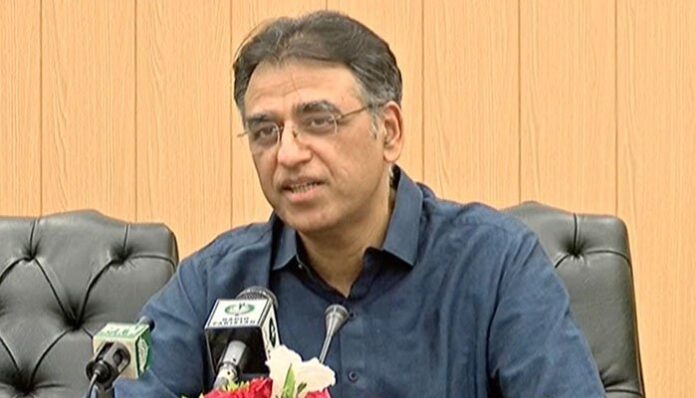 ISLAMABAD: In response to US concerns over China Pakistan Economic Corridor (CPEC), Planning Minister Asad Umar on Saturday said the US diplomat’s statements regarding CPEC loans were “factually incorrect” and that the relations between the two countries “will always remain strong”.

United States diplomat Alice Wells, who is in charge of South Asia affairs at the US State Department, had “warned” that CPEC will further add to Pakistan’s debt burden.

“She said that CPEC is not an aid but an investment and this is correct. There is a small grant element contained within it but fundamentally it is an investment. Pakistan has always recognised that this is not aid and especially this government has always maintained that it wishes to move past the initial scope of the arrangement,” said Umar while addressing a press conference in Karachi.

“The aid that Pakistan received in the past did not really contribute in real terms towards the country’s progress and she was right to point out that we must stand on our own two feet,” the minister added.

Umar, however, rejected the notion that China was the sole benefactor of the arrangement.

“We have said this on many occasions in the past […] that both countries have benefitted [from CPEC]. Chinese firms got business as their machinery was exported and came to Pakistan. The lack of infrastructure in Pakistan, especially in the power sector, was where a lot of the country’s needs were met. Besides that, CPEC became a source of financing in large amounts which was previously unavailable for Pakistan. So a base for infrastructure was laid out in the first phase and now further developments will take place in the next phase,” explained the minister.

“This is what developed countries do. With countries they have good relations with, they enter into agreements that are mutually beneficial. Otherwise, there can never be a relationship of equality and self-respect.”

Regarding a specific query related to ML-1, Umar said that Pakistan’s biggest weakness when it comes to transportation is that it does not have a low-cost transport system.

“The world over, and in America especially, a big reason for their industrial competitiveness is the low-cost transportation system. The cheapest is the river system especially the Mississippi River System and their train systems. Pakistan has long-neglected its train system.

“I was looking at data from the late 60s and saw that 79pc of fertiliser was being transported through the railways and now that number is not even 2pc. So there is no doubt that we must improve our railway systems.

The minister said that Wells’ primary contention was that Pakistan is sinking further into the quagmire of debt with CPEC. “She said that Pakistan’s economy has begun to be crushed under the weight of the Chinese debt. There is no doubt that Pakistan’s external debt has mounted to an extent that economic progress is being impacted and a year ago there was a crisis-like situation. But that has nothing to do with China,” said Umar.

He then went on to explain the role that China has played in Pakistan’s debt crisis.

“As far as the money taken from China is concerned, it was taken at such a time when our trade deficit was dangerously high and our reserves were falling. We were unable to easily procure loans from other sources. This was the hallmark of China’s friendship with Pakistan that in such a time of crisis, it provided us loans from its commercial banks.”

He said that Wells’ argument that the commercial loans were expensive and do not have a long enough payback period was incorrect. “The public debt obtained from China has a maturity period of 20 years and the interest is 2.34pc, which is cheap. And if I include the grant element, the interest value slides down to about 2pc,” the minister explained.

Dismissing her allegation that Pakistan’s development will be limited under CPEC, Umar said that in the first phase the infrastructural development had focused on roads and energy projects. On this basis, he added, Pakistan will see industrial development.

“Beginning in about two months’ time, special economic zones will start opening. She was right to say that not many jobs have been created because in the first phase, when infrastructural development is the goal, that happens. But on the basis of that when industrial development takes off, that will pave the way for jobs.”