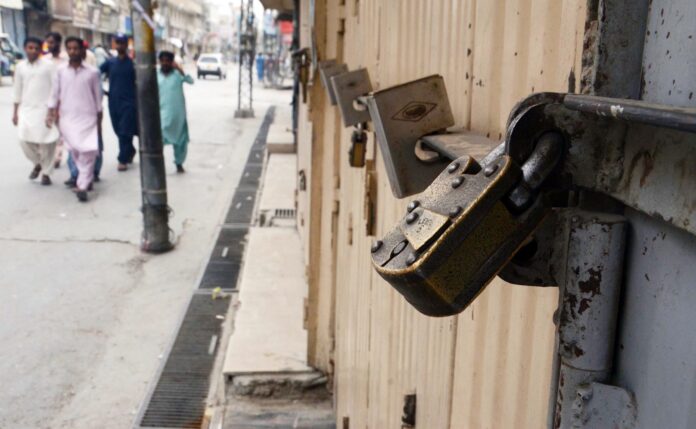 The trading community and the government came to some semblance of an agreement on tax issues recently, after months of simmering tensions nearing a Mexican standoff. However, the threat of the CNIC condition still looms large over the traders’ heads, and the uneasy truce seems set to falter.

It has perhaps become a part of our culture to find a temporary fix instead of a permanent solution to our problems. It has certainly characterized our style of governance when policies are made to win elections, and not keeping in mind the long-term interests of the country. The same policies have led us to the situation where it is practically impossible for traders to fully comply with the tax regime. Being a tax filer, of course, is a desirable situation. Traders are just concerned about their business, they don’t want any trouble. But to follow up on this is made so difficult that the traders are left in an impossible dilemma.

Successive governments have been demonizing importers and traders for years now, the former being called money launderers and the latter, tax evaders responsible for every last woe of the country, including the constantly crumbling economy, political turmoil, the damage to the social fabric, moral degradation, inflation, and your knee pain.

Whilst these accusations are propagated widely, the structural faults in our economic system that rewards individuals who commit these actions are never discussed openly. The root causes of smuggling, mis-declaration of assets and under-invoicing, the three main reasons for illegal money transfers and tax evasion, have never been addressed. Instead, government policies, such as the high duty structure, absurd valuations and regulations like the Third Schedule for imported items and the ban on advance payments appear to have been promulgated to promote such activities, making it impossible for some traders to conduct their business entirely by the book.

Much to the chagrin of uncles snuggled in drawing rooms across the country, the average trader is not sitting in a mansion, twirling his mustache and stealing your money, getting away with all of it thanks to his friendships with politicians.  Smugglers represent a necessity of the market as well at times, filling in the space created by the absence of legal imports – something the current government has been proactively discouraging since it took charge. This has led to the steady deterioration of our economy, bringing us to our current situation. A situation that would require herculean strength from even the most sincere of governments to take us out of.

Unfortunately for our country, successive governments have showed little willingness to pursue any structural reforms to address these deep running fault lines in our economic system. For one, there has never been a focus on making Pakistan’s industries competitive. As a result, every year, we see a rise in imports while our exports remain the same. The industrialists realized long ago that competing directly with international suppliers was an uphill task, especially with expensive electricity and gas, high financing costs and overpriced industrial estates. Their energies were therefore focused on lobbying the government on issues they knew it would be more willing to cooperate on, like increasing duties and devaluation.

Unsurprisingly, we are in a situation now where these duties and taxes have been increased to such an extent that an auto parts importer pays an astounding 81% of the valuation of his goods in duties and taxes to the government at port. Despite this extremely high rate, the auto parts manufacturers still push for an increase in duties at every opportunity they get. What was supposed to be a measure to support developing industries temporarily has now become a cornerstone of our revenue building measures and a barrier without which even the most developed industries say they won’t survive.

This policy has been a huge failure as it only aids the inefficiency of our industries, making them more lax and dependent on tax changes to be able to compete with international players rather than improving their efficiency levels and lowering their costs intrinsically. At the same time, the high duty structure incentivizes smuggling and mis-declaration, providing a bigger reward for taking these illegal risks.

Consequently, we have seen a gradual deterioration of our current account deficit. No matter how much we devalue our currency or increase our duties, without an intrinsically competitive industry, we will never be able to come out of this vicious cycle and compete on the international stage. Discouraging legal imports not only results in smuggling, but is little more than showmanship and sprucing up numbers for the government to tout around. We are only delaying the inevitable by our actions, and whenever these protections are withdrawn, that will also be the end of Pakistan’s uncompetitive industries.

The traders are victims of this economic conundrum, where importing legally means being crushed between high duties and smuggled goods. With Pakistan having porous borders and the government treating importers like enemies of the state, the government is essentially pushing traders towards using illicit methods.

In the current economic situation in which traders are struggling to compete and survive, our government not only refuses to correct this system but also targets the trader community because of its vulnerability created by the economic system. Furthermore, the lack of importance given to traders as stakeholders by the government has contributed to these failed policies. This is despite the traders providing a major chunk of the country’s total revenue and employing 15% of the total workforce of Pakistan. The government should make an effort to include them in policymaking and bring out urgently needed structural reforms to correct our economic system.