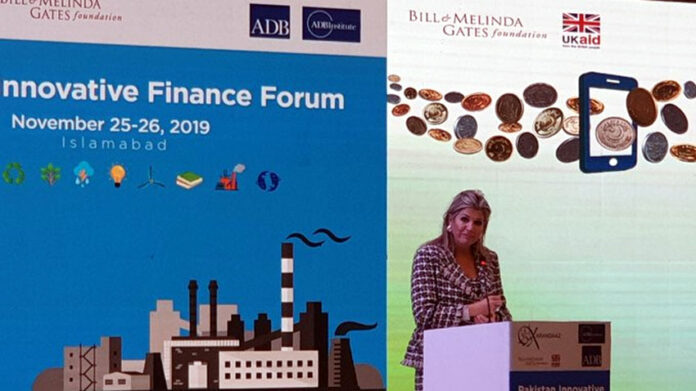 Addressing the ‘Pakistan Innovative Finance Forum’ in Islamabad on Tuesday, she said the financial inclusion would also help create job opportunities for the people of Pakistan.

According to a survey, she pointed out, Pakistan has expanded financial inclusion from 13pc to 21pc. “This progress is encouraging, but more efforts are needed particularly for women and the poor.”

The Queen of the Netherlands lauded the government’s revised financial inclusion strategy targeting 65 million active digital accounts by 2023, including 20 million to be held by women.

Speaking on the occasion, Economic Affairs Minister Hammad Azhar said the government was committed to financial inclusion and has also set targets for this purpose.

Azhar said the government was striving hard to uplift the small and medium enterprises (SMEs) through programmes such as ‘Kamyab Jawan Programme’, which aims to provide subsidised loans to the youth.

He maintained that SMEs were the backbone of Pakistan’s economy and that they have an important role in uplifting the country.

The minister said the government was also focused on improving ‘ease of doing business’ in the country. “Pakistan has jumped 28 positions in the World Bank’s Ease of Doing Business Ranking. This is a great achievement and we are confident that the country’s ranking will further improve next year,” he added.

In his address, Federal Board of Revenue (FBR) Chairman Shabbar Zaidi said the country’s economy was being documented.

He regretted that no effort was made in the past to bring the SMEs into the tax regime, saying that the SMEs remained out of the tax system due to a “lack of taxation-friendly environment”.

The FBR chairman, however, said the incumbent government was making serious efforts to bring the SMEs, including those in the manufacturing sector, into the tax system.

“We have embarked upon a tax reforms programme which focuses on the simplification of tax laws so that more people could be brought under the tax net,” he added.

On the occasion, State Bank of Pakistan and Karandaz signed a memorendum of understanding (MOU) for a micropayment gateway. This gateway would help individuals and businesses to send and receive payments immediately in a transparent manner.

The signing ceremony was witnessed by the Dutch Queen.

Separately, Queen Maxima of the Netherlands visited the Finance Division on Tuesday to meet Adviser to Prime Minister on Finance & Revenue Dr Abdul Hafeez Shaikh and his economic team.

During the meeting, Dr Abdul Hafeez Shaikh gave the Queen a detailed overview of the economic situation in Pakistan with a focus on various policy steps and initiatives undertaken by the government to restore macroeconomic stability and the progress achieved in recent months in different sectors.

The adviser also spoke on the issue of inflation and enhancing local productivity through various policy means and measures. He further briefed the Queen on the nature of public finance and mechanism for resource distribution between the centre and provinces and allocation of funds and resources for the protection of the poor and marginalised sections of the population.

The Queen thanked the adviser for a comprehensive presentation of various aspects of the economy and shared her view on a range of economic issues, including the need for enhanced financial inclusion and better coordination among different tiers of the government.