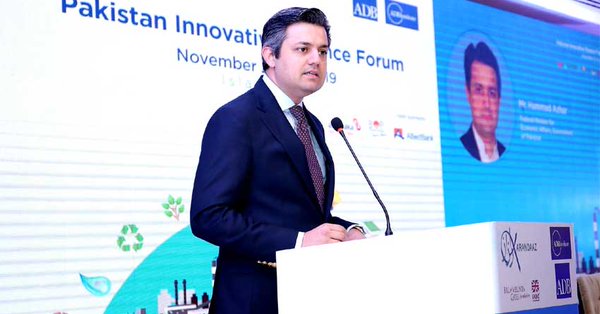 He said since the index counts the performance up to April so it is hoped that the ranking would equally or even more rapidly improve next year because of number of reform measures taken in taxation and other related sectors in the budget 2019-20.

Hammad Azhar pointed out that in Pakistan, the Small and Medium Enterprises (SME) sector contributed 30% to the national GDP and it is comprised of 90% of all enterprises in the country.

Besides, he said, 80% of non-agricultural jobs were being provided by the SME sector however, the sector availed only 7.5% of all financial credit in the country.

He informed that share of credits received by the SME sector had reduced from 15% to only 7.5%.

However, he expressed the government’s resolve to increase this share up to 17% by 2023.

The minister said the government had engaged Small and Medium Enterprises Development Authority (SMEDA) to form the new policy which would address the challenges faced by the SME sector.

He informed that the Prime Minister himself was having meetings with his economic team regularly in which SME sector was on the top of agenda.

The minister added that China Pakistan Economic Corridor (CPEC) was a huge project which would also have significant affect on the SME sector.

Meanwhile, Chairman Federal Board of Revenue Syed Shabbar Zaidi said on the occasion that the basic reason behind small share of financial credits in the SME sector was that a large portion of this sector was not documented and was reluctant to come under taxation system.

He said there was a trust gap between the government and the SME sector and there was a mindset among the SMEs that “if I am an SME then I must not be under tax net”.

He said that in the past, the government had not created taxation friendly environment for the SME sector which resulted in trust gap.

Deputy Governor SBP, Jameel Ahmed said the bank was committed to promote SME sector as developing this sector was key to creation of more jobs, promoting economic activities, and reducing poverty in the country.