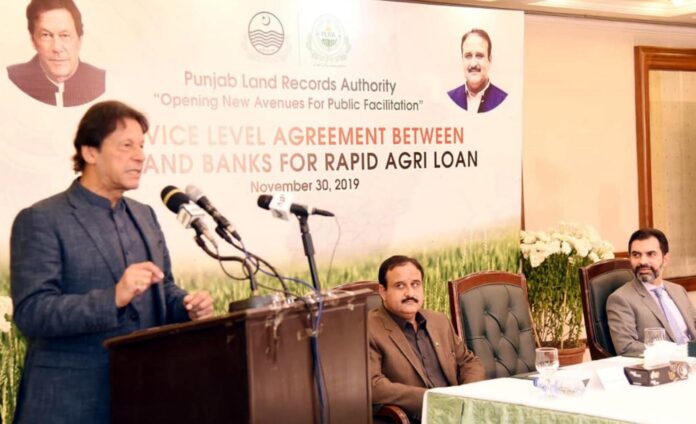 –As per agreement, agri loan processing time will be reduced from 30 days to three days

LAHORE: Prime Minister Imran Khan said on Saturday that the provision of loans to small farmers and small & medium enterprises (SMEs) was among the top priorities of the government, as this would not only address the issue of unemployment but would also help alleviate poverty.

Addressing a ceremony regarding the signing of a service level agreement between Punjab Land Record Authority (PLRA) and major private commercial banks, the prime minister said the agreement would significantly reduce the procedural difficulties that the farmers faced in getting access to credit.

Under the agreement, a digital link would be established between the central database of land records and the banks which would verify the status of farmers’ land, thus reducing the loan processing time from 30 days to three days.

“Through this initiative, a common farmer will get an agriculture loan by visiting a bank and getting his land record verified without any hassle,” the PM informed. “This is a revolution and a great achievement, as loans to farmers were almost impossible in the past. Even small and medium industry, which is the backbone of an economy, used to face difficulties in getting loans,” he remarked.

The PM said that civilised societies always played a collective role to bring their people out of poverty. This had also been the characteristic of the state of Madina which had taken the responsibility of its poor citizens, he added.

He said China steered around 700 million of its people out of poverty within 30 years only because the “state had played its due role and the farmers were supported”.

Highlighting the government’s flagship initiative ‘Ehsaas’, the PM said despite tough financial conditions, the government had earmarked Rs200 billion for various anti-poverty programmes to provide loans to youth and cash grants to women through a database connecting all the public and private sector institutions working on poverty alleviation.

He noted that around 95pc of farmers in Pakistan owned not more than 12 acres of land, which was why they needed agri credit.

Referring to the country’s economic condition during the first year of the government, he said, “We could not concentrate on any other thing except economy…we had to return loans worth $10 billion taken by the previous government, control the currency and bridge the current account deficit.”

He, however, said that today, Pak rupee has gained, the confidence of the businessmen and the stock market has been revived while the investors were looking towards Pakistan.

The PM expressed contentment that the farmers were given a record credit of Rs1 trillion in a year which also showed that the economy was picking up.

He appreciated various initiatives of the Punjab government, which, according to him, would brighten the future of the province.

The PM called for more publicity of the initiatives undertaken by the Punjab government.