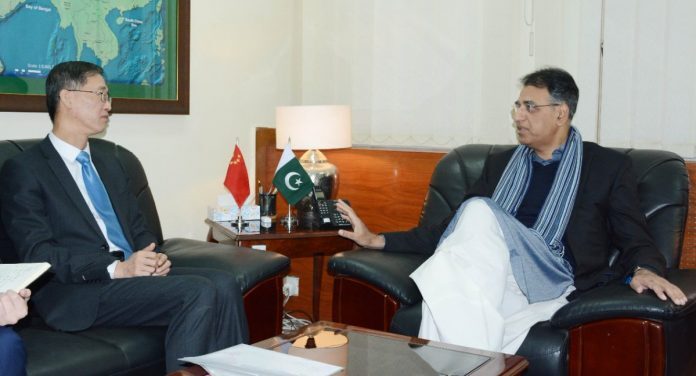 ISLAMABAD: Federal Minister for Planning, Development and Special Initiatives Asad Umar has said that the pace of projects under the China Pakistan Economic Corridor (CPEC) would be accelerated in weeks and months to come.

He was talking to Ambassador of China to Pakistan Yao Jing in Islamabad the other day.

Matters relating to CPEC and economic cooperation between the two countries in general, came under discussion.

Asad expressed his satisfaction at the pace of various projects under the CPEC, saying that that the establishment and operationalization of Special Economic Zones (SEZs) is currently the top priority. The SEZ would enable setting up of joint ventures in manufacturing which would integrate the enterprises from both the sides, he added. He emphasized that it was important for Pakistani manufacturing industries to become part of the global value chain by partnering with the Chinese companies.

Yao Jing expressed the hope that bilateral partnership between the two countries would be taken to new heights in future. The ambassador appreciated the government of Pakistan’s efforts to expedite the work on the CPEC projects.