Economists term constant increase in cost of energy, raw material and working capital as reason behind decline in LSM production 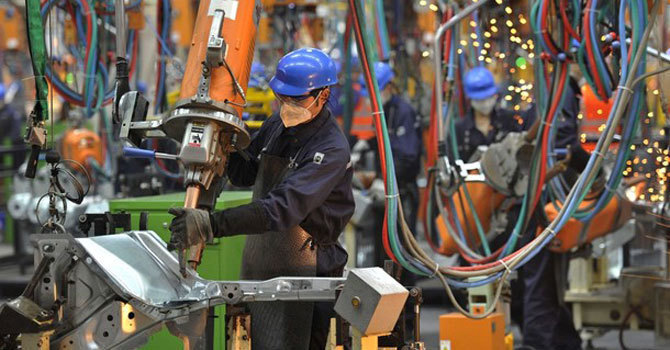 ISLAMABAD: The large-scale manufacturing (LSM) output decreased by 5.9pc in the first five months (July-Nov) of the current fiscal year (FY20) compared to the same period of the previous fiscal.

According to data released by the Pakistan Bureau of Statistics (PBS) on Friday, LSM contraction in November was recorded at 3.78pc as compared to October 2019, and 4.61pc when compared with November 2018.

Economists say constant increase in the cost of energy, raw material and working capital due to the doubling of interest rate (13.25pc) affected the production costs as well as the profits of firms.

The Ministry of Industries & Production, which monitors 15 industries, reported a 3.63pc decline while provincial bureaus reported 1.49pc contraction in 11 industries during the first five months of FY20.

On the other hand, industries that were producing eight major types of goods recorded a dip in their manufacturing during the period under review. The production of food, beverages and tobacco went down 6.57pc, coke and petroleum products by 12.19pc, pharmaceuticals 8.38pc, chemicals 5.46pc, automobiles 37.7pc, iron and steel products 13.82pc and electronics 16.22pc.

According to industry sources, local investors were concerned over the government’s inaction towards the facilitation of industries that are barely surviving. They believed that the government’s measures to curb imports were in fact “encouraging the practices of under-invoicing and smuggling”.

“In the local industries, sales are slowing down due to lack of demand. But the industries are still forced to increase rates due to cost-push inflation,” a source familiar with this matter said. “The central bank is stubbornly keeping the interest rates high to attract ‘hot money’ while the local businessmen cannot afford to operate on such high mark-up loans.”