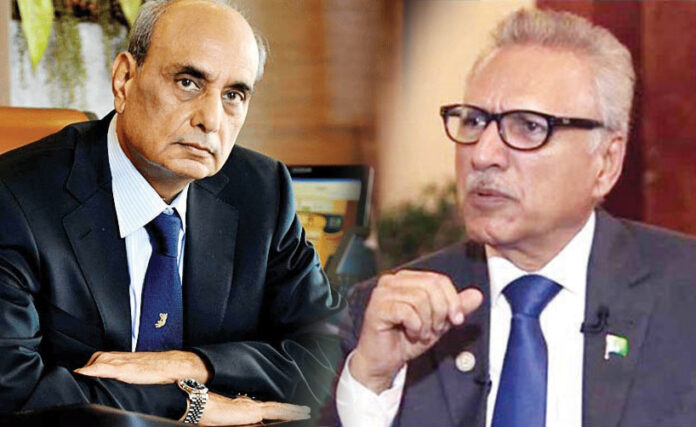 LAHORE: President Dr Arif Alvi has said Pakistan is undergoing economic difficulties, but there are clear and positive signals that the worst is over and the country’s economy and society both are in the process of recovery.

“The business community has rendered valuable services for the development of Pakistan and we request you all for a little more patience while the government’s reform process takes root and demonstrates results,” the president while talking to a group of leading businessmen including business tycoon Mian Mohammad Mansha.

According to a press release issued on Sunday, President Alvi was invited to an exclusive dinner reception hosted by Nishat Group Chairman Mian Mohammad Mansha for the president, First Lady Samina Alvi and Lahore based business families.

On the occasion, businessmen met the president and exchanged views on the prevailing business environment.

President Alvi told the gathering that there was also a need to avoid cynicism and undue criticism of state institutions.

Speaking at the occasion, Nishat Group Chairman Mian Mohammad Mansha, who led the delegation, said, “We acknowledge the government’s successes in improving the security situation and in bringing Pakistan Super League (PSL) back. Prospects of peace in Afghanistan are also encouraging as it will improve security and economic activity in the region and allow enhancement of cross border trade between Pakistan, Afghanistan and into Central Asia. This also bodes well for the business communities of both countries and it holds the promise of economic development and prosperity for the people.”

Due to the slowdown in business and economic activity in the country, people were losing jobs on account of retrenchments which needed to be addressed effectively, he said, adding inefficient State Owned Enterprises (SOEs) were generating losses, which have to be offset with tax money, could otherwise be spent on the people’s welfare.

“The government needs to privatize these entities to avoid further losses to the national exchequer,” he suggested.

Mansha further added that the business community was a major stakeholder and thus the government needed to be in constant dialogue with the community so we could synergize efforts and attain economic progress.

“The business community also needs to be provided an enabling environment, one that is free from harassment, intimidation and bureaucratic bottlenecks, so that they can concentrate and dedicate all efforts towards generating economic activity without which, neither growth can be achieved nor jobs can be created for our youth,” he concluded.