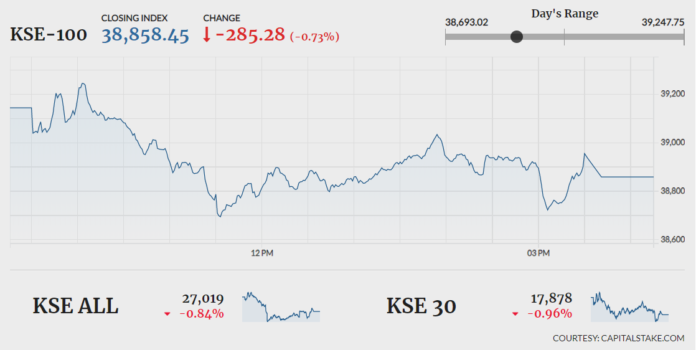 KARACHI: Bearish trend continued at the Pakistan Stock Exchange (PSX) on Tuesday, with the benchmark KSE-100 index falling below the 39,000-mark.

On the financial side, Hub Power Company Limited (HUBC -1.29pc) declared its financial performance for the second quarter of FY20. Despite 62pc increase in its gross profit, the company’s earnings per share shrank from Rs1.28 to Rs1.10. Its cumulative EPS for the first two quarters was recorded at Rs2.34.

In a notification to the exchange, Hi-Tech Lubricants Limited (HTL+0.70) announced that it has been granted permission by the Oil and Gas Regulatory Authority (OGRA) to proceed to apply/acquire no-objection certificates (NOCs) from concerned departments to set up 35 retail outlets in Khyber Pakhtunkhwa with instructions that retails sales can only be started after completion of necessary storage infrastructure, third-party inspector report confirming that the storage/depots at Nowshera meets OGRA’s notified technical standards.