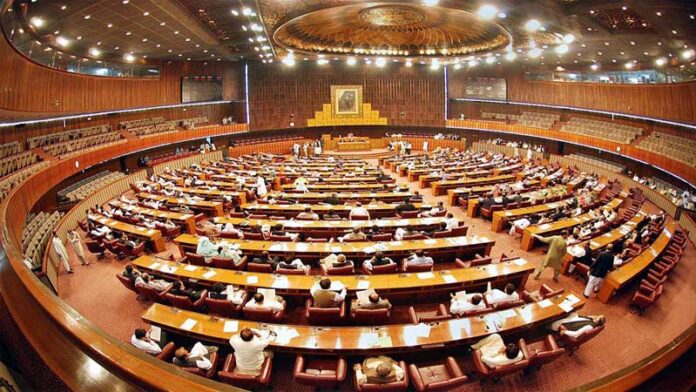 ISLAMABAD: The National Assembly’s Standing Committee on Finance, Revenue and Economic Affairs on Thursday directed the Federal Board of Revenue (FBR) to expedite the payment of refund claims of exporters and traders.

The meeting, which met under the chairmanship of MNA Faizullah, pointed out that refund payments were not being made for several months, causing severe liquidity problems, especially among the exporters.

Discussing the agenda regarding issues being faced by the textile exporters/importers, textile industries and traders regarding refunds and CNIC conditions, MNA Ali Pervaiz demanded that the refund payment system must be made effective and transparent by eliminating discrimination in the processing system.

He also demanded the restoration of the zero-rating facility for five export-oriented sectors, saying that this facility would help boost the country’s exports.

MNA Qaisar Ahmed Shaikh said the condition of CNIC and revoking of the zero-rating facility were not practical as there were numerous complications in the procedures.

FBR Member Seema Shakeel in response said that maximum cases of refunds had been accommodated, however, only those cases were pending where requirements were not met properly.

She also presented the month-wise data regarding the release of refunds up to December 2019.

She informed that a committee, comprising of exporters and senior FBR officers, was appointed to resolve the technical problems of Form “H” and they have completed their assignment.

However, the exporters were of the stance that they would not be able to continue their business due to refunds stuck with FBR for the last six months.

They also highlighted the weaknesses of FBR’s Faster Refunds System and requested the board to address the same at the earliest for the smooth functioning of export industries in Pakistan.

Meanwhile, the committee also discussed matters regarding encashment of security of Reliance Petroleum Industries (Pvt) Limited by the customs authorities. The committee advised collector customs (Karachi) to resolve the matter amicably before the meeting of the Sub-Committee of the Standing Committee on Finance, scheduled to be held on March 17.

Moreover, the NA boy considered the problems being faced by the real estate sector due to anomalies created by the FBR in the valuation table on immovable properties.

Pakistan Real Estate Investment Forum (PREIF) President Shaban Elahi informed the committee that FBR should focus on the problems raised due to unrealistic valuations of properties in different areas of Karachi, as well as all over the country.

He also suggested that law might be enacted to protect the end consumer from the Builders.

He deplored that builders were exceeding their limits by selling more flats or plots as per the approved plan. “The government should immediately intervene in such kind of issues.”

FBR Member Dr Hamid Ateeq informed that different committees at commissioner levels in 21 cities had been appointed to address the problems of valuation to the stakeholders.