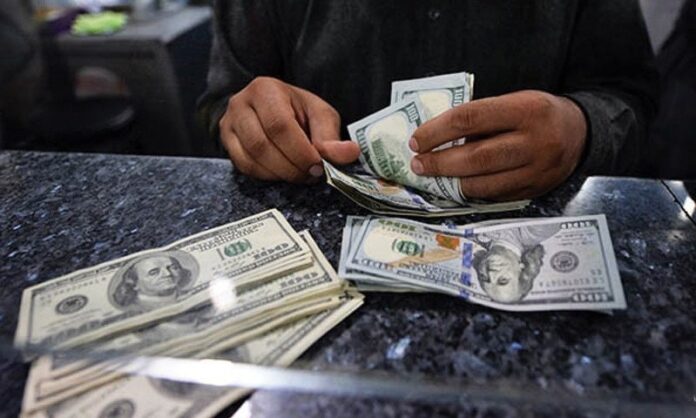 The Pakistani Rupee depreciated by Rs2.6 against the US Dollar in Wednesday’s interbank session.

The local currency closed the day’s trade at Rs161.61 per USD, as against yesterday’s closing at Rs159.01 per USD.

The rupee endured a highly volatile trading session with quotes being recorded in a range of Rs3.70 per USD, showing an intraday high bid of 162.75 and an intraday low offer of 159.45.

According to Sami Tariq, Head of Research and business development at Arif Habib Limited, “This should be temporary. As commodity prices are down, yield differential will attract investments again. However, risk aversion at present is resulting in appreciation of the dollar against other currencies.”

The recent slump in the value of the rupee is attributed to the slash in the policy rate.

On Wednesday, the State Bank of Pakistan (SBP) cut the policy rate by 150 basis points, from 12.5pc to 11pc. This follows a policy cut from just last Tuesday, when the SBP cut the policy rate from 13.25pc to 12pc. The policy rate cut can be seen as a reason for hot money leaving the country. The SBP maintains that foriegn money outflows are due to a general ‘flight to safety’. Many developed countries are divesting from emerging markets due to the COVID-19 crisis, in order to have liquidity.

While stock markets are falling drastically, global economic fears surrounding the COVID-19 crisis have resulted in liquidity selling. Thereby, capital flight is a common sight as sovereign debt is liquidated.

Earlier on 17 March, at the MPC meeting, SBP Governor Reza Baqir clarified the exchange rate policy, saying the central bank will intervene whenever there is volatility, but it will not try and actively suppress demand and supply in order to determine the direction of dollar rates.

The federal government has also announced a Rs1.2 trillion stimulus package amid lockdown across the country. Around Rs200 billion has been allocated for labourers and Rs100 billion tax refunds will go to exporters and industry.

According to the AKD securities report titled ‘PM Package – No antidote for uncertainty’,  “On the flip side, the aggressive easing at this stage could further accelerate the hot money outflows – which nevertheless are likely to continue amidst global risk aversion – putting more pressure on rupee in the near term. Looking ahead, we do not rule out further monetary action from the SBP considering extraordinary times.”

On the contrary, in the international currency market, the dollar has slipped. The euro traded at $1.0808 up 0.15pc after four straight days of gains. The dollar dropped 0.3pc against the yen to 110.85, off a one-month high of 111.715 touched the previous day.

Meanwhile, PKR lost Rs7 to the Pound Sterling, as Wednesday’s closing quote stood at Rs193.36 per GBP, while the previous session closed at Rs186.33 per GBP.

Similarly, PKR’s value weakened by Rs2.7 rupees against Euro (EUR) and closed at Rs175.23 in the interbank market.