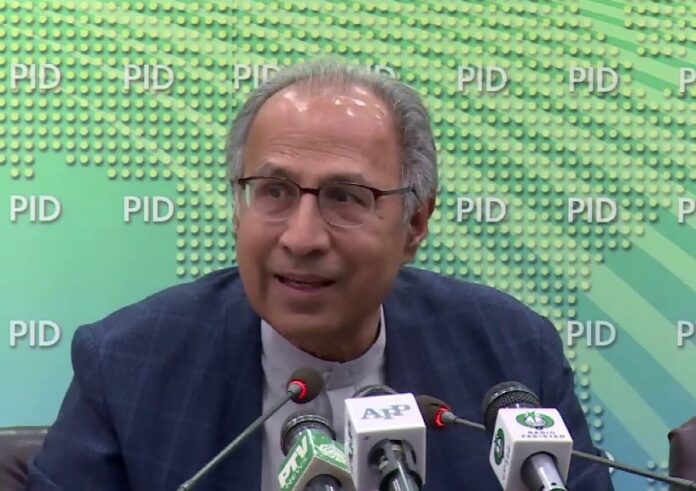 ISLAMABAD: Pakistan has approached the International Monetary Fund (IMF) with a request of $1.4 billion to mitigate the economic fallout of the coronavirus pandemic, Prime Minister’s Finance Adviser Hafeez Shaikh said on Wednesday.

Addressing a press conference, he said this sum is separate from the current $6bn programme and that the World Bank will also provide $1bn to the country to support its efforts against the corona pandemic. He was accompanied by PM’s Adviser on Commerce Razak Dawood, Federal Minister for Economic Affairs Hammad Azhar, PM’s media aide Firdous Ashiq Awan, PM’s Special Assistant on Petroleum Nadeem Babar and others.

According to the PM’s aide, the economy was on the path of the recovery; however, after the pandemic, the government was expecting a slowdown in the economic activity throughout the country.

Giving reasons for the slowdown, he said: “Demand for Pakistan’s exports will fall as the economies of the countries that it exports to are weakened; remittances from expatriates will be affected as countries where they are based, such as Saudi Arabia and the UAE, are weakened; economic activity to be reduced which will in turn reduce people’s income and taxes.”

To keep the economy from crashing, the government has already announced a Rs1.2 trillion relief package, he said, adding that “we have to save our own people first”.

He said that the coronavirus pandemic has put the economy on a challenging path: it would not only affect the exports but would slow down domestic economic activities and thereby reduce tax collection.

Shaikh said that out of the total Rs1.25tr, Rs200bn would be spent on daily wagers and labourers: the government would provide Rs3,000 per month to the workers in coordination with the business community and provincial governments.

The adviser said that the package also included Rs100bnfor industry and exporters which would be spent to resolve liquidity issues of the business community, such as payment of refunds and deferment in interest on principal amounts.

For the agricultural and Small and Medium Enterprises (SME) sectors, Rs100bn would be spent for deferment of loans, concessional loans, and underwriting by the government for creditor subsidy, he said, adding fertilisers would also be subsidised to facilitate farmers.

Shaikh said that Rs1450bn would be spent to provide relief to around 12 million vulnerable people by providing them Rs 3000 per month for a period of four months.

In addition, he said that the government was also expanding Panagahs [shelter homes] to provide immediate relief to “very low-income people”.

The adviser said that Rs50bn would be given to the Utility Stores Corporation (USC) to provide five basic edible commodities on subsidised rates, such as flour, pulses, sugar, and ghee.

He said that the governed intended to spend Rs 280 billion to procure 8.2m tonnes of wheat during the current season to keep the inflation in check.

He said that reduction of oil prices was also part of the relief package as the prices of per liter petrol, diesel, kerosene, light diesel oil have been reduced by Rs15. There was a possibility of a further decrease in the POL prices as the global prices won’t see an upward trend.

In addition, Rs36bn (quantum relief) has been provided on electricity up to 300 units per month and Rs 2,000 gas bill in three monthly installments, he said, adding Rs15bn would be incurred on tax break on health and food supplies, while Rs.100 billion would be provided as Residual/Energy Fund. The government will also provide Rs25bn to the National Disaster Management Authority (NDMA).

Hafeez Shaikh said that the pace of spending through the Public Sector Development Programme (PSDP) would be enhanced to generate overall economic activity, whereas efforts were also being made for fund mobilization.

The adviser said that the economy of the country was moving in the right direction and claimed that the current account deficit had also reduced from $20bn to $3bn.

Likewise, he added, the government paid back loans of Rs4,000bn whereas the revenue collection had also witnessed a 17 per cent increase during the first eight months and foreign exchange reserves of State Bank of Pakistan rose by $5bn.

He said that the primary balance had remained positive, which was rarely witnessed by the Pakistan economy in the past.