Is cash in Pakistan’s economy expected to rise? 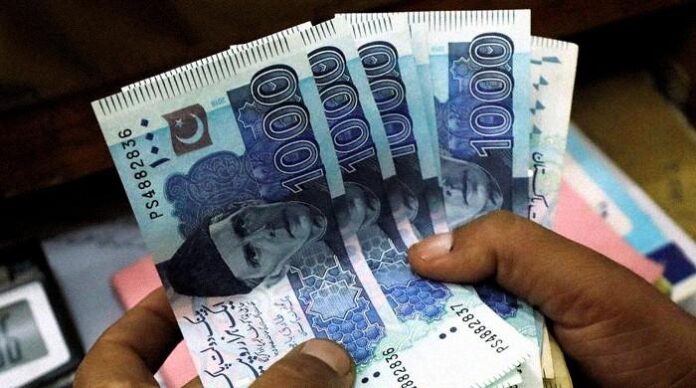 KARACHI: In the midst of the COVID-19 pandemic, there has been anecdotal evidence to suggest that demand for cash has increased. Much of this has been fueled by videos and pictures of people withdrawing cash which have circulated online.

It makes sense – in times of uncertainty, people are more likely to withdraw cash from banks. Currency circulation may also increase, as the government has announced a Rs1.2 trillion stimulus package, to support both workers and businesses financially.

Profit did a close analysis to see how much of this can be accurately quantified, and to check whether currency circulation in Pakistan has increased.

There are two data sources to gauge the current situation.

The first is by checking M2 data form the State Bank of Pakistan, which refers to the money supply in the economy. This includes cash, checking deposits, ‘near money’, or assets that can be quickly converted into cash.

Currency circulation crossed the Rs5trillion mark in May 2019, and has consistently stayed above that mark since July 2019.

So, can these numbers tell us something? The cash economy in Pakistan has always been strong, and as the numbers suggest, currency circulation has really increased in the last seven years.

According to Saad Hashmi, executive director at BMA Capital, both 2019 and 2020 have seen a sharp rise because of the government’s strict taxation and documentation drive, and documentation. Many people preferred to keep cash at home instead of in the bank, to avoid taxation.

While this was expected, the recent fiscal announcement of a stimulus package has also put some pressure. Typically, the government borrowed from the private sector, under the IMF rules. But according to Hashmi, that rule may be relaxed due to the extraordinary circumstances of the COVID-19 pandemic. In that case, the government could borrow from the central bank – which would result in more money being printed, more M2 and of course, more money in circulation.

However, SBP data has a lag of 10 to 12 days for the most recent events, which means that the COVID-19 ‘effect’, if any, will show up in weeks from now, according to most commentators.

The second way to gauge cash in the economy is to check bank deposits.

A cursory look at the SBP data According to SBP data, deposits in the last week of February stood at Rs14.815 trillion. This is not only higher than the January figure of Rs14.672 trillion, but is actually the highest figure recorded stretching back to 2002.

However, if you look a little closer, that number dipped in the week right after, to Rs 14.682 trillion, before again climbing to Rs14.760 trillion in the week ending March 13.

It is a little more tricky to comment on deposits, or where they will land by the last week of March. According to Faizan Kamran, analyst at Arif Habib Limited, it is difficult to definitively say how cash patterns might change in the coming weeks.

“There is a possibility that people may shore up their liquidity in these times but I don’t think it would be as significant to cause a run,” he clarified.

Besides, the most important thing to note is that the State Bank of Pakistan has been proactive about making sure that banks during the lockdowns remain open, as banking has been declared an essential service.

According to a circular sent out by the SBP on March 23, all bank branches will operate with the “bare minimum” staff to ensure banking services continue, and will be open from Monday to Friday at 10:00 am, and close at 4:00pm, until further notice. All ATMs will also remain open, along with digital and alternate delivery channels.

Perhap more of a concern is not cash withdrawals, but the fallout due to the low economic activity.

“Banks’ concerns would probably be more on the asset side in terms of weak outlook for fresh loan growth due to a fall in economic activity and heightened concerns of credit defaults,” said Kamran.

He added that the virus will have an adverse impact on growth momentum in the economy, saying that everyone will be cautious as the uncertainty is too high.

Another aspect to consider are the interest rates. As interest rates were higher, more money theoretically, should be parked in banks. In Pakistan, while deposits have increased, the State Bank Governor Reza Baqir has noted on multiple occasions that the threat of coming under the tax net is so high, that Pakistanis still withdraw cash.

Now that the SBP has cut interest rates in March from 13.25pc to 12.5pc, and then again to 11pc, there might be even more cash circulating in the economy.