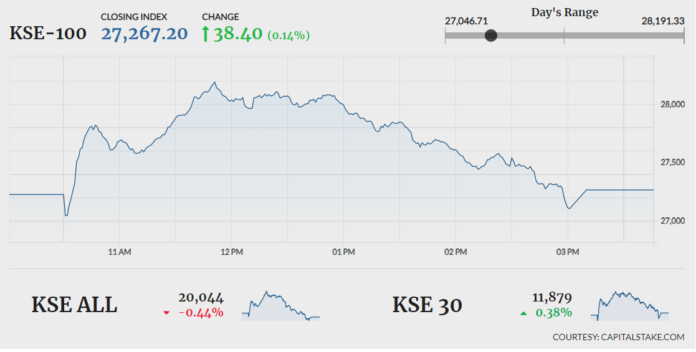 KARACHI: The Pakistan Stock Exchange (PSX) witnissed a highly volatile session on Thursday, as the benchmark KSE-100 Index failed to sustain gains accumulated earlier in the day and closed flat.

“The International Monetary Fund and World Bank’s joint statement on suspension/forbearance of outstanding debt for IDA countries (including Pakistan) contributed to the improvement in investor sentiment, besides regulatory measures introduced by the government on account of elimination of CVT on capital market transactions, easing liquidity of AMCs and ban on short selling,” an alalyst at Arif Habib Limited noted.

According to media reports, the State Bank of Pakistan has said that it was considering measures to support the virus-hit market. On the other hand, Pakistani Rupee continued with its losing streak on Thursday, with the US Dollar crossing Rs166-mark (a record) intraday.

Systems Limited (SYS +7.49pc) announced its financial performance for FY19. The company’s revenue increased by 42.21pc from the previous year, while its gross profit grew by 50.73pc. The company’s earnings per share improved by 35pc YoY. A final cash dividend of Rs2.25 was declared.

In their notifications to the exchange, Loads Limited (LOADS +1.74pc) and D G Khan Cement Company Limited (DGKC -7.35pc) have announced temporary suspension of their operations due to the ongoing lockdown by authorities.