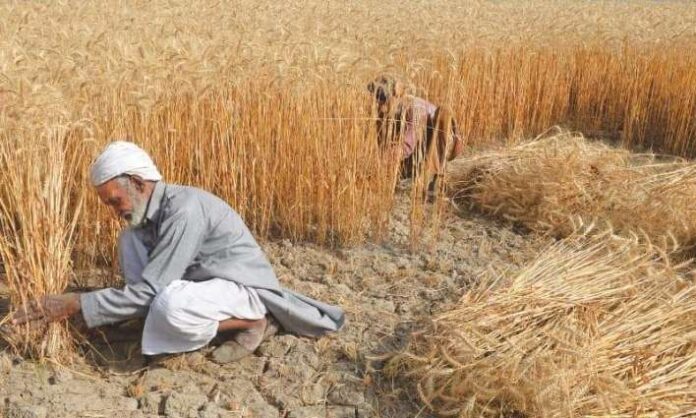 LAHORE: Wheat crop harvesting and threshing processes are running smoothly across the country, with chances of an early close this season, given that the majority of villagers who were previously working in urban areas have moved back to their native towns following the imposition of virus lockdowns.

Inaugurating the wheat harvesting campaign in Rajanpur the other day, Punjab Chief Minister Usman Buzdar had informed that the wheat procurement target this year was fixed at 4.5 million metric tonnes and that the commodity would be procured at Rs1,400 per maund.

According to sources, the Punjab government has started distributing bardana (wheat gunny bags) while the procurement process is also in full swing in Sindh and other parts of the country.

There were some transportation issues faced by wheat farmers in parts of Sindh, but these were resolved after the intervention of the provincial government, they added.

Talking to Pakistan Today, Malik Ahsan, a wheat farmer from south Punjab, said that harvesting would get a boost this season owing to favourable weather as well as the availability of labour in villages.

He said that wheat harvest is an annual festival for many families, as they arrange their annual wheat stock in this season. A family of three can easily earn up to five maunds of wheat (Rs7,000) per day, he added.

“This three-to-five-week activity leaves a family with wheat stock for a year and enough cash to sustain for three months,” Ahsan maintained.

Allah Ditta, a 55-year-old farmer from Okara, said they are a family of six who can easily harvest up to two acres a day (10 maunds of wheat per day).

“We start harvesting early in the morning around 5am before taking a break at around 1pm,” he said. “Our work then resumes at 3pm and continues till 7pm.”

“These media reports are far from reality and completely baseless, creating panic among the public,” he remarked.

Haider said that they are not facing any transportation or labour issues in the harvesting of wheat crop and that there is no threat to the country’s food security due to lockdown.

Talking to Pakistan Today, an official of the agriculture department confirmed that the wheat harvest and procurement processes are in full swing as gunny bags are being distributed across Punjab.

“We are trying our level best to achieve the wheat procurement target of 4.5 million tonnes in record time (as early as possible),” he added.