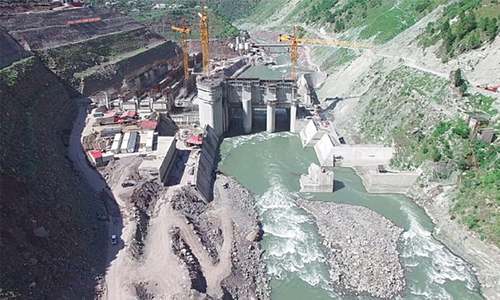 ISLAMABAD: Concerned stakeholders have asked the federal government to resolve territorial disputes between Khyber Pakhtunkhwa (KP) and Gilgit-Baltistan (GB) before undertaking any development work on the multi-billion-dollar Diamer-Bhasha Dam project.

During a special meeting held recently at the Ministry of Planning and Development to review progress on the mega project, it was informed that apart from territorial disputes between the tribes of KP and GB, many other issues were also needed to be resolved before making any headway on the project.

According to sources, both chief ministers gave conflicting views on the territorial issues, which have remained unresolved for years despite violent clashes between two tribes — both claiming ownership over 8km of the dam’s land.

The GB chief minister informed the meeting that the issue needed to be carefully resolved in consultation with all stakeholders, adding that the findings of previously constituted one-member commission was not acceptable to the tribes. He suggested that the federal government form a ‘grand jirga’ of the two tribes to resolve the dispute amicably.

“In order to decide about the territorial dispute and other related issues, the federal government should keep in view the sacrifices made by the people of GB in the larger interest of the country,” he said.

Taking notice of the issue, Asad Umar said that his ministry would hold a meeting soon after Ramzan to resolve the land dispute. The minister also asked the chief ministers of KP and GB and other relevant officials to ensure their presence in the meeting.

The boundary dispute at Diamer-Bhasha dam between the residents of Diamer district of GB and Kohistan district of KP has deepened with the passage of time, with both tribes refusing to budge from their positions.

The Harban tribe of Kohistan and the Thor tribe of Diamer claim ownership of a piece of land spanning over eight kilometres in Gandlo Nala area, where the dam’s power plant has to be installed. The dispute turned violent in February 2014, when seven people died in a clash between the two sides.

Earlier, the KP Assembly had passed a resolution, claiming that the eight kilometres of land on the right side of Diamer-Bhasha dam was part of KP. The move infuriated GB’s political leaders, who constituted a committee of all sitting lawmakers from the Diamer Valley to probe the issue.

The committee had traced documents signed between the representatives of Kohistan and Diamer in 1947, which had declared the land as part of Diamer.

When former chief justice Saqib Nisar decided to raise funds for the project, he had also taken notice of the land dispute, and asked the ruling PTI to find an out-of-court settlement of the issue. But later, due to the constitutional limitations, the issue of royalties arose, as some of the turbines of the dam would be installed in GB while others would be set up in KP.

During the special meeting at the planning ministry, Asad Umar was briefed about the progress on land acquisition as well the work being done for the early award of the contracts for the construction activities. The minister directed the relevant officials to ensure that work proceeds as per the set timelines.

WAPDA officials gave a detailed briefing on land acquisition, resettlement and other aspects of the project. It was informed that the project was divided into six major components, and that separate contracts would be awarded in a phased manner after due consultations with the relevant stakeholders.