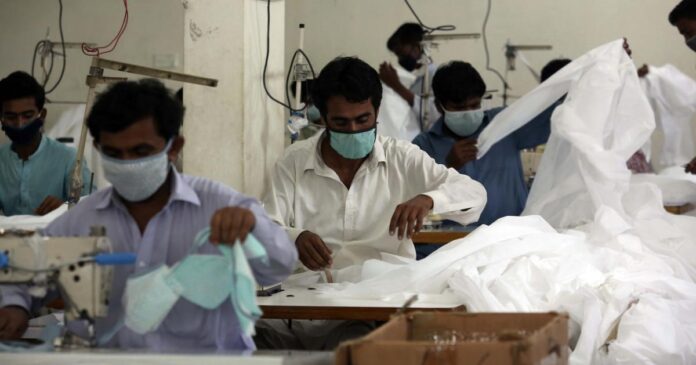 During the 102nd NAC meeting, which was chaired by Planning Secretary Zafar Hasan, it was formed that the provisional GDP growth for the year 2019-20 has been estimated at -0.38pc, based upon growth estimates of agricultural, industrial and services sectors.

“The provisional estimates of the GDP and Gross Fixed Capital Formation (GFCF) for the year 2019-20 were presented on the basis of latest data of 6-9 months, which were annualized by incorporating the impact of Covid-19 for the final quarter,” said a statement issued on Monday. “The smart lockdown policy adopted by the government minimised the impact on economic growth compared to compete lockdown situation.”

It may be noted that following the outbreak of coronavirus in the country, the International Monetary Fund (IMF), World Bank, finance ministry and the State Bank of Pakistan had predicted up to -1.5pc economic growth for the current fiscal year.

The NAC was informed that the agriculture sector grew by 2.67pc; growth of important crops during this year was 2.90pc. This increase was due to an uptick in the production of wheat, rice and maize at 2.45pc, 2.89pc and 6.01pc, respectively. However, cotton, and sugarcane crops witnessed a negative growth of 6.92pc and 0.44pc, respectively.

Other crops (onion, potato, vegetables etc.) showed a positive growth of 4.57pc mainly due to an increase in the production of pulses, oil seeds and vegetables.

Similarly, the livestock sector registered a growth of 2.58pc owing to a lower in demand for dairy and poultry post coronavirus. The sector was earlier projected to register record gains.

Forestry grew 2.29pc due to an increase in the production of timber.

Meanwhile, the country’s industrial sector witnessed a negative growth of 2.64pc mainly because of the imposition of corona-related lockdown.

Electricity and gas sub sector grew by 17.70pc mainly due to higher subsidies and better value addition in WAPDA companies, whereas construction activity increased by 8.06pc mainly due to an increase in general government expenditure.

The services sector, which has remained Pakistan’s major growth driver for years, witnessed a rare contraction of 0.59pc in the provisional estimates, while the wholesale and retail trade sector contracted by 3.42pc, and transport, storage and communication sector saw a negative growth of 7.13pc.

Finance and insurance sector showed a modest increase of 0.79pc. The remaining components of services i.e. housing, general government and other private services witnessed a positive growth of 4.02pc, 3.92pc and 5.39pc, respectively.

It is pertinent to mention that the country would witness a negative growth in its economy the first time since 1951 largely due to the coronavirus pandemic.

The pandemic outbreak has played a havoc with world markets, with the IMF estimating the world economy to contract by 3pc this year – the most severe downturn since the Great Depression in the 1930s. The situation could get much worse if the pandemic lingers into the second half of the year or resurges.

Before the spread of Covid-19 across Pakistan, the finance ministry and the IMF had projected 2.4pc GDP growth in the current fiscal year.