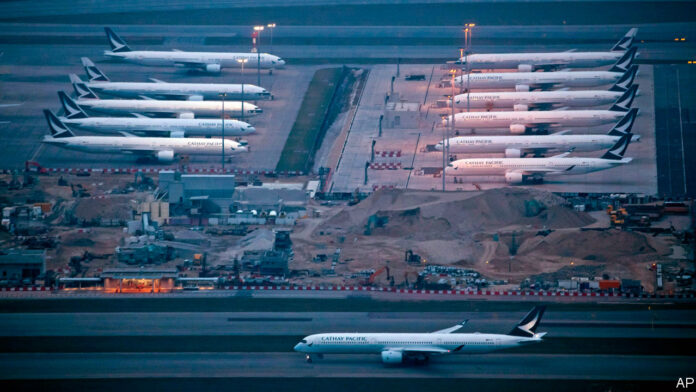 Major airlines on both sides of the Atlantic are cutting even more jobs as they struggle to cope with a plunge in air travel that will leave the airline industry much smaller than it was before the coronavirus pandemic and economic collapse.

EasyJet said Thursday that it will cut up to one-third of its 15,000 employees. The London-based budget airline’s CEO said he had no choice.

“We do it to make sure that easyJet not only survives through this period, but also comes out of this as a strong and competitive company,″ Johan Lundgren said. “This is still the worst crisis that this industry has ever been faced with. There’s a huge amount of uncertainty going forward.”

American Airlines, meanwhile, plans to cut its 17,000 management and support staff by 30% — about 5,100 jobs. That could include layoffs in October if there aren’t enough takers for a buyout offer.

Executive Vice President Elise Eberwein said in a memo to employees that nearly 39,000 other employees have signed up for partially paid leave or early retirement, and the airline is extending a buyout offer to administrative staff. Laid-off workers will be paid through Sept. 30 to comply with a no-furloughs provision attached to $5.8 billion in government aid that American is getting to help cover payroll costs.

Delta Air Lines said Thursday that it will extend early-retirement and buyouts offers in a bid to limit layoffs in the fall. About 40,000 of Delta’s 91,000 employees have already agreed to take unpaid leave.

“While we never dreamed just a few months ago that we would be talking about a smaller Delta — this was expected to be a year of growth, after all — this is the reality we’re facing,” CEO Ed Bastian said in a memo to employees.

It’s not just airlines. Boeing announced that it will eliminate about 13,000 jobs worldwide, including sending layoff notices this week to 6,770 U.S. employees, because of falling demand for new planes.

Airlines are reporting a slight increase in passengers since mid-April, when the number of flyers fell to under 100,000 a day in the U.S., a level not seen since the 1950s. But the carriers are bracing for a slow recovery — it will take time for many people to feel safe from the virus while flying.

“It will likely be two to three years before we see demand recovery on a large scale,” Bastian said.

Around the world, airlines have grounded about 15,000 jets– more than half the global fleet – and pressed some planes into cargo duty to bring in revenue. They have cut back to bare-bones schedules to reduce costs and match the small number of people who are still flying.

In some case, those moves have not been enough. Several major airlines have filed for bankruptcy protection, including the two largest carriers in Latin America, Latam and Avianca. They are continuing to fly while hoping to reorganize their finances and shed debt.

The Latin American carriers have not received government aid to prop them up. Major airlines in Europe and the United States are on better footing after receiving promises of billions in assistance. If the pandemic rages on and air travel remains severely depressed this fall, however, there are no guarantees, even for the strongest airlines.

In the United States, bankruptcy speculation has swirled around American Airlines, which has the most debt and the shortest time to wait for a travel recovery, given its faster rate of burning through remaining cash. CEO Doug Parker tried to quash the chatter.

“I’ve heard people say that,” Parker said during an investor conference. “We don’t look at (a bankruptcy filing) as an option, that’s failure.”

Parker predicted that every U.S. airline will survive but the industry will emerge 10% to 20% smaller in 2021 than it was before the pandemic.

The airlines’ troubles are creating ripples through the aviation industry, at aircraft makers Boeing and Airbus and their suppliers. General Electric Co. is cutting jobs in its aircraft-engine business. So is Spirit AeroSystems, which makes fuselages and other components.

Unions representing workers in aviation fear that companies are using the emergency to shed employees unnecessarily. Some, like Brian Strutton, general secretary of Balpa, the British pilots’ union, said he was shocked by the scale of cuts announced at easyJet.

“Given easyJet is a British company, the U.K. is its strongest market and it has had hundreds of millions in support from the U.K. taxpayer, I can safely say that we will need a lot of convincing that easyJet needs to make such dramatic cuts,” Strutton said. He called the downturn a “temporary problem” that doesn’t require massive job losses.

Airlines are looking for governments to help not only with financial aid but to take steps that might encourage more people to fly.

U.S. airlines want the government to screen passengers for fever, although some public health officials question temperature readings as a reliable indicator of whether someone is infected with coronavirus.

“How do you explain to British people that we’ll see Germans and other European nationalities going to holidays in Greece and parts of Spain where there’s less risk of being infected than in places in the U.K.?″ he said.