Suspension of int'l flights, closure of borders, rising freight fares, and contracting demands are likely to pull the country’s mango exports down by 40pc this year 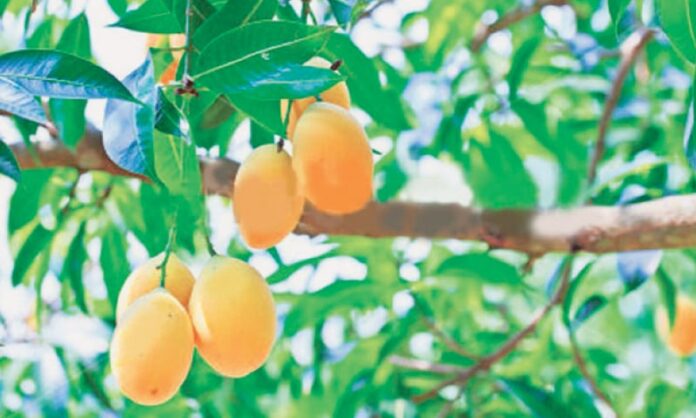 LAHORE: Pakistan’s traditional mango exports have taken a hit from the economic havoc wreaked by the coronavirus pandemic, as exporters fear a huge decline in export of the fruit this year.

Suspension of international flights, closure of borders, rising freight fares, and on top of all, contracting demands altogether are likely to decline the country’s mango exports by 35 to 40 per cent this year.

This year, however, according to Waheed Ahmed, a leading fruit exporter and president of Pakistan Fruits Exporters Association, the country is not expected to export more than 80,000 metric tonnes of mangoes.

“Pakistan had earned over $90 million through mango exports alone but it will not be more than $50 million this year due to the present coronavirus conditions,” Ahmed told Anadolu Agency.

“Timing is a key factor vis-a-vis mango exports as it’s a perishable commodity. It cannot wait long,” he said, adding: “Suspension of international flights has badly hit the mango exports to Europe and the US.”

“Many exporters are sending mangoes to Europe and the US via cargo flights but their charges have increased four times,” Ahmed said.

Closure of borders with neighboring Iran and Afghanistan have also added to the decline in mango exports.

“Mango exports to the Middle East are continuing via sea route but the demands are not that high as tens of thousands of Pakistanis and other South Asians have returned to their countries [from Gulf states], while a large number of people have lost their jobs,” he said.

“The overall mango exports will be lesser this year due to Covid-19-related restrictions, mainly closure of international flights, and a huge increase in freight rates,” Shah told Anadolu Agency.

Cost of production, he went on to say, has also increased due to implementation of Covid-19 safety guidelines.

Pakistan partially lifted a prolonged ban on international flights last week, which Shah thought, would give relief to mango exporters.

“This will certainly have a positive impact because at least access will be available,” he observed.

“But, I don’t see a huge difference because airlines are not going to decrease freight rates,” he added.

Ahmed too sees little impact on mango exports from resumption of flights.

“I don’t see a major impact on [mango] exports because there is no decrease in freight rates.”

Extolled as king of fruits, India and Pakistan recognise mango as their national fruit.

Both often unleash the fruit’s clout in diplomacy and political outreach. Mangoes have also been used by writers and poets in the region over centuries to represent unspoken thoughts and feelings.

There are two dozen mango varieties in the country, notably, Anwar Ratol, Dasheri, Langra, Saroli, Sindhri, Totapari, and others.

But the taste of Pakistan is Chaunsa, which accounts for 60pc of the country’s total mango exports.

The most famous Pakistani mango is the Anwar Ratol, which has its roots in a village two hours from New Delhi, in the Baghpat district of western Uttar Pradesh in India.

Many years before partition in 1947, a mango grower from Ratol in Uttar Pradesh had migrated to Punjab and named a sprig he had transplanted there after his father, Anwar.

Almost every year, Pakistan sends a box of mangoes to the Indian prime minister, and other top functionaries in the Indian capital, New Delhi.

Despite its aroma and taste that makes the Pakistani mango a hot favourite, little attention is being paid to adopt latest harvest practices to improve quality further.

The country’s mango production has declined over the past four years, a phenomenon blamed on global warming.

“Mango crops require hot weather but winters are going longer and longer every passing year, which is gradually affecting production,” he said.

This year, Ahmed said, the mango crop is already two weeks late due to delayed summer.