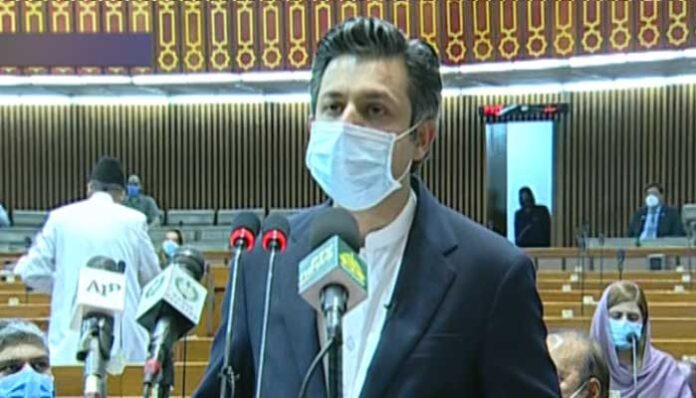 –Inflation to be brought down from 9.1pc to 6.5pc; 73pc of PSDP allocated for ongoing schemes, 27pc for next projects

–Sales tax brought down to 12pc from existing 14pc; upper limit for shopping without showing CNIC increased from Rs50,000 to 100,000

ISLAMABAD: The Pakistan Tehreek-e-Insaf (PTI) government on Friday unveiled a coronavirus-influenced Rs7.13 trillion “tax-free” budget for the fiscal year 2020-21 in a special session of the National Assembly (NA) on Friday amid protest by the opposition parties.

Addressing the budget session in which Prime Minister Imran Khan also participated, Federal Minister for Industries Hammad Azhar emphasised that no new tax was being introduced in this budget. He said that the need of the hour was an expansionary fiscal policy which the government was implementing.

“Lockdown, social distancing, and precautionary measures have adversely affected the economy. As economies around the world, Pakistan’s economy also took a hit due to the coronavirus,” he added.

The minister said that gross revenue receipts have been estimated at Rs6,573 billion.

He said that the tax collection target for Federal Board of Revenue (FBR) has been set at Rs4,963bn while the non-tax revenue is estimated to be about Rs1,610bn. “Under the National Finance Commission (NFC) Award, Rs2,874bn will be transferred to the provinces and the provincial share in federal taxes is estimated at Rs2,873.7bn,” he said.

The minister said that the external receipts for the next year are estimated at R2,222.9bn, and the development expenditure outside Public Sector Development Programme (PSDP) has been estimated at Rs70bn in the budget.

He said that the total federal expenditures are estimated at Rs7,137bn with a budget deficit of Rs3,437bn, which is seven per cent of the Gross Domestic Product (GDP). The primary balance will remain -0.5 per cent, he added.

“The size of PSDP for 2020-21 is Rs1,324bn. Out of this, Rs676bn have been allocated to provinces. Federal PSDP has been estimated at Rs650bn, out of which Rs418.7bn for federal ministries and divisions, Rs100.4bn for corporations, Rs3bn for Earthquake Reconstruction and Rehabilitation Authority and Rs7bn for Covid-19 response and other natural calamities programme,” he said.

The minister said the allocation for defence affairs and services is Rs1,289bn, an increase of 11.9 per cent despite the earlier announcement that military spending would remain unchanged in view of the grave economic situation compounded by the Covid-19 pandemic. The increase, however, is 5 per cent if compared with the revised spending of Rs1,227 billion in 2019-20. Part of the excess defence spending in the ongoing fiscal year has been attributed to the continued tensions between Pakistan and India.

Azhar said that the government is thankful to the Pakistan Armed Forces for extending cooperation in the government’s austerity drive.

The minister said the new budget aims at striking a balance between coronavirus expenditures and fiscal deficit, and it also aims to achieve primary balance. He said that it seeks to continue social expenditures for the assistance of vulnerable and weaker segments of society under Ehsaas Programme, besides continuing assistance of people during the next financial year to cope with the coronavirus outbreak.

He also said that the budget document also attempts to keep development budget on appropriate level so that objectives of economic growth are achieved as well as jobs are created. He added that significant attention has been given on defence and external security of the country. The budget aims to achieve improvement in revenues without unnecessary changes in taxes, he further said.

Giving the targets set for next fiscal year, the minister said that GDP growth target has been set at 2.1 per cent, which remained negative four per cent in the outgoing fiscal year, adding that the current account deficit will be confined to 4.4 per cent.

“Inflation will be brought down from 9.1 per cent to 6.5 per cent. Foreign Direct Investment (FDI) will be enhanced by 25 per cent. 73 percent of the PSDP has been allocated for the ongoing schemes and 27 per cent for the next projects. Special emphasis has been given to the social sector,” he said.

“For this, allocations have been enhanced to Rs249bn from Rs206bn. The government has formulated a special development programme worth Rs70bn to offset the negative impact of the coronavirus pandemic and other calamities and improve the living standard of the people,” he added.

Azhar said the government is focused on improving the power transmission system and reducing the circular debt. He said that sufficient resources have been allocated for the provision of electricity to the special economic zones and the projects to be executed with foreign funding. “For this purpose, the government has earmarked Rs80bn, and these funds will especially be used to reduce the gap between electricity demand and supply,” he added.

The minister pointed out that Pakistan is facing severe water shortage. He said that the government will give special emphasis to the water-related projects this year and in this connection, Rs69bn have allocated. Ample resources have been allocated for big projects such as Diamer-Bhasha Dam, Mohmand and Dasu Dams, he added.

Referring to the challenge posed by Covid-19 for the health sector, the minister said that Rs20bn have been allocated to improve the capacity of health institutions and production of health equipment with the aim to provide better health services and check diseases in the country. He also said that health allocation for the next year has more than doubled (130 per cent rise) to Rs25.5bn from last year’s Rs11bn. He added that the funds would be used to improve health services and digitise the framework.

Turning to the education sector, the minister said that Rs83.3bn have been allocated for education, 7.9 per cent up from last year’s Rs77.2bn.  He said that Rs5bn have been allocated for reforms in this sector. He also said that steps will be taken to introduce a uniform curriculum and quality examination system as well as establish smart schools and bring the seminaries into the national mainstream. He added that Rs30bn have been allocated to bring innovation in higher education sector with the aim of improving research and development in subjects such as artificial intelligence, automation and space technology. He further said that the government has increased budgetary allocations for Higher Education Commission (HEC) from existing Rs59bn to Rs64bn.

Azhar said that assistance to poor and vulnerable segments of society is top priority of the government and for this purpose an integrated system has been devised under which all relevant institutions have been merged into newly-constituted Poverty Alleviation and Social Security Division.

He said that the budget for Ehsaas Programme has been increased to Rs208bn from the existing Rs187bn, and the amount will be spent on vulnerable segments of society in a transparent way. He added that a sum of Rs179bn has been allocated to provide different subsidies in energy, food and other sectors.

The minister said that the government has provided Naya Pakistan Housing Authority a sum of R30bn to provide low cost housing to the people. In addition to this, through Qarz-e-Hasna Scheme Rs1.5bn will be dispersed through Akhuwat Foundation for low cost housing, he added.

He said that Rs55bn have been allocated for Azad Jammu and Kashmir (AJK) and Rs32bn for Gilgit-Baltistan (GB). A sum of Rs56bn has been allocated for merged districts of Khyber Pakhtunkhwa (KP) and Sindh has been provided a special grant of Rs9bn and Balochistan Rs10bn, which is in addition to their share in NFC, he added.

The minister said that under the steps to improve remittances, a sum of Rs25bn has been set aside for receipts through banks. He said that in order to provide affordable transportation services to the people of Pakistan, a sum of Rs40bn has been specified for Pakistan Railways.

Regarding empowering youth, Azhar said that Rs2bn have been allocated for Kamyab Jawan Programme for capacity building of the youth. He said that a sum of Rs13bn has been reserved for federally administered hospitals in Lahore and Karachi. He added that over Rs1bn have been earmarked for e-governance to improve public service delivery.

The minister said that on the suggestion of President Dr Arif Alvi, the sum for Artists Welfare Fund has been increased from existing Rs250m to Rs1bn. He said that initiating e-governance, IT-based services and 5-G services will remain the focus of the government. An amount of Rs20bn has been allocated for projects in these sectors and Rs6bn have been allocated to deal with the impacts of climate change, he added.

He said that the government has earmarked Rs40bn for the execution of different projects in AJK and GB, and Rs20bn have been set aside for the TDPs. Rs2bn have been allocated to support the Afghanistan’s rehabilitation, he added.

“To achieve sustainable development goals, an amount of Rs24bn has been set aside, while Rs12bn will be spent for the development projects in agriculture sector to ensure food security,” the minister said.

Submitting tax proposals, Azhar said that it has been suggested to reduce the sales tax ratio from existing 14 per cent to 12 per cent on point of sale to provide relief to common people and shopkeepers in wake of Covid-19.

He said that minimum tax on hotel industry has been reduced from 1.5 per cent to 0.5 per cent for six months with effect from April 2020. He added that a mobile application had been introduced to facilitate salaried class to submit their tax returns, which resulted in an increase of 37 per cent.

Azhar said that an automatic system has been introduced for filing of tax returns. He said that seizures, as a result of anti-smuggling campaign, witnessed a rise of Rs19 to Rs30bn. Elaborating relief measures, the minister said that the upper limit for shopping without showing identity card has been increased from Rs50,000 to 100,000.

He said that import of dietetic food for medical purposes will be exempted from sales tax, while exemption on import of medical equipment has been increased for further three months. He added that Federal Excise Duty (FED) on imported cigarettes and tobacco is being increased from 65 per cent to 100 per cent, while e-cigarettes and other substitutes of tobacco have also been included in this list.

“To discourage consumption of caffeine-based energy drinks, FED is being increased from 13 per cent to 25 per cent. It has also been proposed to impose tax on double cabin pick-up vehicles as per other cars as wealthy people use these pick-ups as status symbol,” he further said.

Azhar said that under Sections 231P and 234, advance tax will not be collected on auto rickshaw, motorcycle rickshaw and motorcycle up to 200cc. He said that in order to become withholding agents for individuals and partnership business, the existing limit of sales is being increased from Rs50m to Rs100m to facilitate small and medium enterprises (SMEs).

He also said that it has been proposed that 100 per cent additional tax is collected on school fees exceeding Rs200,000 per year from persons who are not in Active Taxpayer List.

He further said that as all banks do not have required system to deduct taxes on profits received by different persons, it has been proposed to collect withholding tax of 15 per cent across the board on proceeds.

Azhar said that it has been proposed to provide exemption to donations given to specific institutions with certain terms and conditions to ensure their monitoring. He added that the budget also includes a proposal to reduce duration for withholding tax on sale of immovable property to four years from existing five years.

Later, the House was adjourned to meet again on Monday.