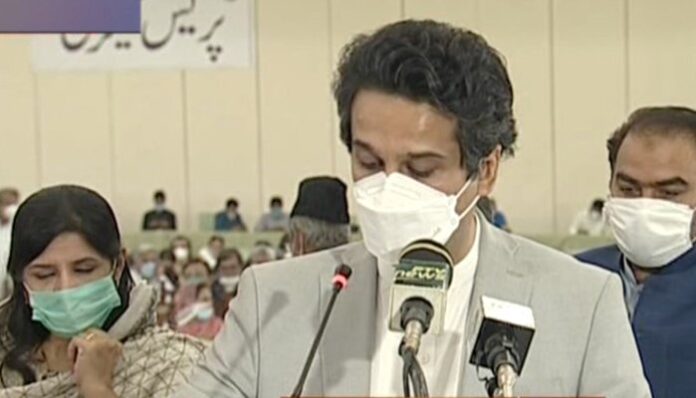 –Brings down tax to 5pc for over 20 services; stamp duty rate cut to 1pc

LAHORE: Punjab Finance Minister Makhdoom Hashim Jawan Bakhat on Monday presented the provincial budget proposal for the next fiscal year in the Punjab Assembly with a total outlay of Rs2,240.7 billion, including Rs337bn for development, amid ruckus caused by the opposition members.

The finance minister said that under the National Finance Commission (NFC) Award, Punjab will receive Rs1,433bn, while provincial receipts (own resource revenue) are estimated at Rs317bn during the financial year 2020-21.

Terming the provincial budget as “progressive” and “pro-business” in the given circumstances, he added that on-going expenditure for the next fiscal year have been estimated at Rs1,318bn containing Rs337.6bn for salaries, while Rs337bn have been allocated for development expenditures, Rs128.40bn for capital expenditure, and Rs125bn as estimated provincial surplus.

The finance minister said that the government has also reduced Service Delivery Expenditures by Rs10bn and increased the local government’s budget by Rs10bn. He added that the provincial government was planning on saving more than Rs19bn through pension reforms.

The provincial government has earmarked Rs284.20bn for the health sector collectively in the financial year 2020-21 budget.

According to documents issued in this regard, Rs250.70bn will be spent on ongoing regular projects, while Rs33bn have been allocated for development expenditures in the health sector.

The provincial government has specifically allocated Rs13bn to overcome Covid-19 and Rs26bn for procurement of medicines instead of Rs23bn earmarked during the previous budget.

The provincial government will spend Rs6bn on upgradation and provision of missing facilities in the district headquarters hospitals of Dera Ghazi Khan, Gujranwala, Sahiwal as well as the Institute of Urology and Transplantation Rawalpindi, Nishtar Hospital Phase-II Multan, Mother and Child Block Sir Ganga Ram Hospital, Upgradation of Radiology/ Specialties Department Services Hospital Lahore and establishment of Institute of Pediatric Cardiology and Cardiac Surgery at the Children Hospital.

It will also provide important facilities in the Wazirabad Institute of Cardiology, Institute of Neuro-Sciences Lahore and Pakistan Kidney and Liver Institute Lahore during the current financial year.

The government earmarked Rs12bn for Insaf Health Cards initiative, which will be introduced across the province.

An amount of Rs11.46bn has been allocated under the Department of Primary and Secondary Healthcare Development budget and it will be spent on upgradation of DHQs hospitals situated in the underdeveloped areas, establishment of new mother and child hospitals and revamping of all DHQs and 15 tehsil headquarters hospitals.

An amount of Rs9.35bn has been allocated under the development budget by the Punjab government for ongoing schemes including medical education, specialised healthcare and miscellaneous and tertiary care hospitals of specialized healthcare and medical education while Rs250m would be spent on new schemes of the sector and Rs12.55bn have been allocated for other development programme (ODP).

The opposition parties staged a loud protest during the finance minister’s speech.

They held placards inscribed with slogans against the budget.

Members of the opposition parties, including the Pakistan Muslim League-Nawaz (PML-N) and Pakistan People’s Party (PPP), also attempted to besiege the finance minister’s seat during the speech. However, after protesting for several minutes, the opposition members walked out of the session.