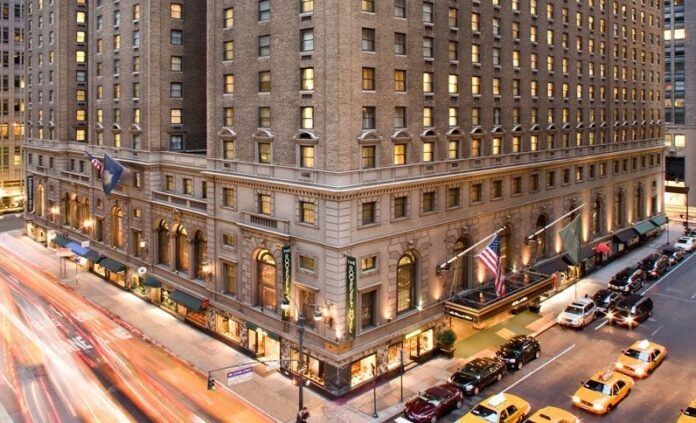 –PIA official says hotel will be leased on long-term basis

At the outset of the meeting, Pakistan Muslim League-Nawaz (PML-N) leader Khawaja Asif inquired from PIA officials whether anyone had shown interest in buying the property. He then noted that Trump had wanted to purchase it.

At this, PIA Investment Limited Managing Director Najeeb Sami disclosed that the American president “is still showing interest in Roosevelt”.

Trump already owns seven luxury hotels and several resorts and clubs in a number of major cities across the US.

In his briefing to the committee, Sami said that Roosevelt is a three-star hotel which had been profitable for 99 years. However, the hotel suffered a loss of $1.5 million last year, the official added. He said it was not profitable for PIA to run the entire hotel on its own and it should, therefore, be replaced with offices and hotels.

“It has been decided to give Roosevelt hotel on lease on a long-term basis,” Sami told the lawmakers.

Earlier this month, the Cabinet Committee on Privatisation (CCoP) had decided against selling off the Roosevelt and to run it through a joint venture instead.

The CCoP had directed the Privatisation Commission to appoint a financial adviser to start the process for the transaction in light of a report by accounting firm Deloitte from July 2019 which recommended that “the highest and best use of the Roosevelt Hotel property is to redevelop the site into a mixed-use [property] (through joint venture) of primarily an office tower over retail and condominium.”

Asif said although his party did not oppose privatisation “at all”, this wasn’t a suitable time to privatise any entity because the coronavirus pandemic has caused market prices of almost everything to fall.

He said the rights of employees should be protected whenever privatisation is carried out and they should be provided with enough funds to start their own businesses. People who own real-estate businesses abroad should not be made part of the body deciding the hotel’s fate as it could lead to corruption, Asif added.

The PML-N lawmaker observed that PIA itself could not be privatised in the current circumstances either. He acknowledged that it was a “mistake” on PML-N’s part that it remained unable to privatise the national flag carrier during its tenure.

Privatisation Minister Muhammad Mian Soomro informed the committee that various options were currently being looked into regarding the fate of the Roosevelt, adding that a financial adviser will take the decision regarding leasing out the hotel.

The PIA-owned 19-storey hotel with 1,025 rooms plus allied facilities in New York is considered a valuable property that also carries cultural significance for Pakistan. It has remained in the news for the last several years over its proposed auction. However, the management of PIA in the past had always rejected the claims of auction, etc.

The hotel was acquired by PIA Investment Limited on lease during the year 1979 with an option to purchase the property. The airline had purchased the hotel for $36.5 million against a demand of $59.5m by contesting a lawsuit against the owner in 1999. The Roosevelt has been managed by Interstate Hotels & Resorts since 1997.

- Advertisement -
Facebook
Twitter
Linkedin
WhatsApp
Email
Previous articlePKR to hover around Rs163 against USD in 2020: Fitch
Next articleGoogle faces off against the Joker malware and loses again