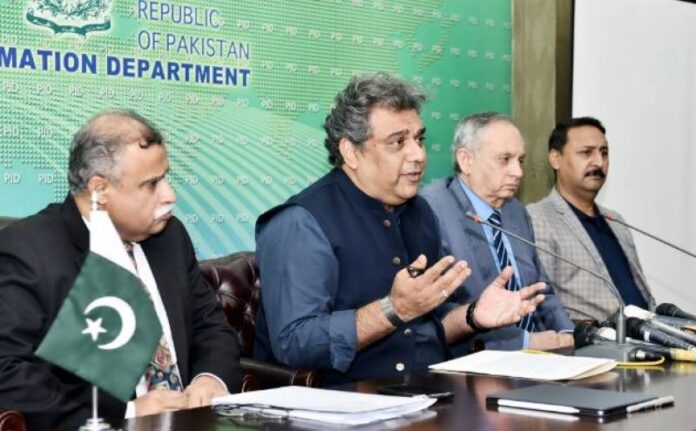 ISLAMABAD: With an aim to uplift the local shipping industry, which is lagging behind its regional competitors, the Ministry of Commerce (MoC) and the Ministry of Maritime Affairs have announced the country’s new shipping policy.

Addressing a media conference alongside Adviser to Prime Minister on Commerce Abdul Razaq Dawood, Maritime Affairs Minister Ali Zaidi highlighted the importance of the shipping industry and ports for any country with a vast coastline.

“Under the impact of the new shipping policy, we will soon see registration of 3-4 local shipping companies, which will also ensure job security for our seafarers,” Zaidi said.

He informed at the time of independence, there was not a single seafaring ship in Pakistan and Quaid-e-Azam called the father of Ardeshir Cowasjee to request for help in this regard.

“Ships were not registered in Karachi at the time as and used to be registered in Bombay and Calcutta; the first ship registered in Pakistan was named ‘Fatima’ by Mr Cowasjee,” the minister informed.

He said although a strong shipping industry was eventually developed in Pakistan, it went to near collapse after the nationalisation policy of 1972, with only the public sector – Pakistan National Shipping Corporation (PNSC) — remaining in business.

“While the private sector regained its position in other areas of businesses, the shipping side remained neglected by the private investors,” he said. “Even now, those Pakistanis who own ships do not get them registered in the country.”

The minister stated that Pakistan currently spends around $5 billion annually in terms of freight charges for all foreign trade, of which the share of PNSC is mere five per cent, adding that the national company remained mostly focused on the import of petroleum products.

He said the government aims to invite the private sector in the shipping business, assuring complete facilitation in this regard.

“By the year 2030, customs’ duty will be abolished for all ships to be registered in the country so that they become national flag carriers,” he said. “The other incentives in the policy include exemptions of sales tax and income tax on all income of the ship.”

He said the most important incentive for the Pakistani flag carriers would be the first berthing right. It was an international practice and it saves a lot of money for the ships if unloading is not delayed, he added.

“Another relief for all the private sector is the reduction in the Gross Tonnage Tax (GRT), given that shipping companies agree to accept freight charges in Pak Rupees and not in the greenback. This incentive has been approved in the finance bill of 2020-21.”

Under the new marine policy, the state bank has allowed the Long Term Finance Facility (LTFF) for the ships and vessels, which was earlier available to exporters.

“This will help investors buy all floating vessels including tug boats, dredgers, cargo vessels and even the fishing boats to obtain the long term borrowing at three per cent from the banks,” the minister said. “This will also help us upgrade our fishing sector to a deepsea fishing industry.”

ISLAMABAD: Swedish investors, on the invitation of the Federation of Pakistan Chambers and Commerce and Industry (FPCCI), has accepted to join the China Pakistan...
Read more
- Advertisment -

January 21, 2021
ISLAMABAD: The Securities and Exchange Commission of Pakistan (SECP) has taken stern action against two companies engaged in luring the general public to unauthorised...