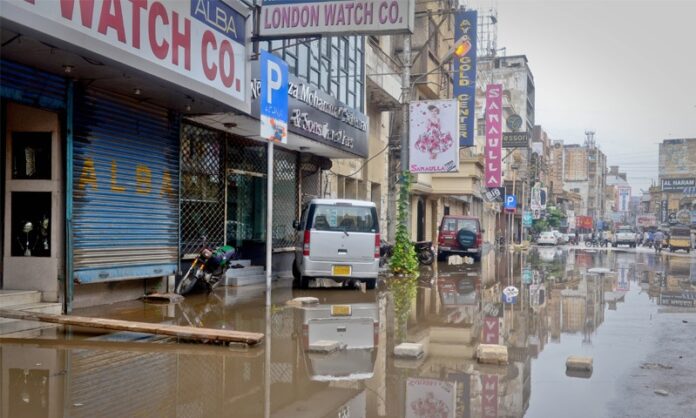 Traders all over the city closed shops several hours before the official shut down time of 7pm. Thursday and Friday’s downpour also affected the supply chain of goods and raw material from ports. Several traders were also absent in their night shifts on two days with heavy rains while many asked their workers to leave factories after afternoon prayers due to heavy thunderstorms.

While there were several complaints of power fluctuations from around the city, several industrialists appreciated the fact that water and solid waste did not pool around industrial areas as the federal government had cleaned the nullahs around the city.

Korangi Association of Trade and Industry Chairman Sheikh Umer Rehan spoke to media and said that industries could only operate on 50 percent capacity as many workers were absent on Friday while most of the industries stopped production as early as 2pm. Moreover, many industries had not called in full worker strength on Friday in view of the rain forecast.

North Karachi Association of Trade and Industry Chairman Naseem Akhtar said industries also corroborated what Rehan said, adding that industries had asked workers to go home after 2pm which curtailed production by half in addition to affecting export shipments.

Some industrialists also faced difficulties in the latter part of the process, whereby their production went according to schedule but they couldn’t dispatch their goods to customers due to persistent rains.

Markets in the old city areas are being said to be worst hit where rain and sewerage water pooled in front of shops and godowns causing losses of millions of rupees to traders as well.